Former Ghosts Drift Away Into The Friendzone 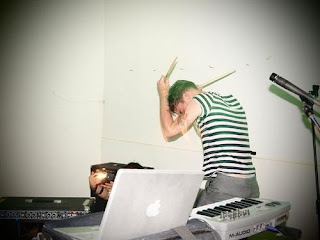 This post is effectively two posts, although intrinsically linked by one well
executed remix.


Former Ghosts have piqued my interest ever since best label/promoters in the world* Upset The Rhythm put out Fleurs last year. The brainchild of Freddy Ruppert, Former Ghosts is a heady rush of stark industrial lushness, the coldness inexplicably emanating warmth, hence the Joy Division references made in the past. Helped by Xiu Xiu's Jamie Stewart, TEARIST's Yasmine Kittles and a certain Nika Rosa Danilova, Former Ghosts walks a murky tightrope of turbulent emotions, ultimately a deal with the devil, the progeny of which is this disturbed synth pop that has the elements of light and dark constantly at battle.
Then along comes a remix of their track 'Chin Up', coming out on their newie New Love in a month (also through Upset The Rhythm).

I approach all remixes that come into the SM inbox with trepidation, as many (OK, the vast majority) so called 'remixes' are either ho-hum or completely dire. However I decided to chance the arm of this one, and it easily showed it could go the distance...and then some. The track, already having that dark ambient charm that they have cornered with aplomb, is buoyed by additional drumming tracks, severely distorted vocals and insistent synth, creating an entirely new track that Ruppert himself endorses wholeheartedly on his FG mixtape, Welcome To Old Love, a prequel of sorts to the new album which is stellar, and here.
So who are the wielders of such dreamy magic then? Rather than being that moment in time when you realise that the person of your dreams will always be your bud and nothing more (a nightmarish and all-too-common notion), Friendzone is the project of James Laurence and Dylan Reznick. They are from the Bay Area of San Francisco, although hanging mainly in Oakland, and have put out a series of mixtapes that are influenced by their immersion in the Chicago-based footwork movement, something that I will post about shortly, as well as large dollops of ambient music. I found their mixtapes just as alluring as their Former Ghosts remix - see what you think below...

Former Ghosts tour with bloodlines Zola Jesus and Xiu Xiu in November.
*Upset The Rhythm put on the best shows in London hands down, and are amazing in their choice of eclectic music to put out. This is a London-centric viewpoint of course, but there really needs to be wider exposure on what these guys do.
Posted by Brendan T