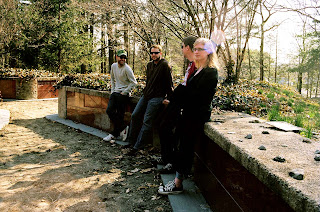 Boston's Soccer Mom originated as the bedroom noodlings of Dan Parlin, before being fleshed out into a four-piece - Danielle Deveau (bass), David Kaplan (drums), and William Scales (guitar). They have been developing their sound for a few years, and yet their current 7" Billy Cosby In Glamorous Chains is their first proper release. With this kind of slow gestation, maybe they should combine with Autolux and score the next Terence Malick film? However their vision is set - they aim to find the perfect balance between harmony and distortion, melody and debilitating feedback; they wear their influences (ie Swervedriver, Sonic Youth, My Bloody Valentine) - but above all to provide a lot of noisy fun. I interviewed the band about their direction, their influences - but first of all, that name...

Sonic Masala - The moniker - Soccer Mom - I personally really hate that term, and was ready to write you guys off based solely on that! Where did the genesis of the name come from?

Dan Parlin - To be honest, the name started a long time ago, and the motivation behind it was probably more humour than anything else. At the time, I (Dan) was playing in other bands but making bedroom recordings in my free time - when I wanted to put out of tape of all the songs I had been working on, I chose the name because, initially, the song lyrics all had something to do with what some terrible, bored housewife would do in her free time. I had songs about a woman stalking her neighbor in the grocery store, one about putting the "care back in the caravan" - it was all pretty silly. While I always took the music itself seriously, the lyrics were just an afterthought. At the time I was in bands where the lyrics were all very serious - this was sort of an escape from that. But, when we decided to take some of the songs and form a band around it, we kept the name. Granted the first song we all learned was about going to the Mall, but it's certainly become less silly as we've progressed. It's kind of a bummer that it might turn people off but, when you think about it, lots of bands have names that are kind of silly. It could be worse - we could be called Vampire Weekend.

SM - Ha, exactly! But do you think Soccer Mom as a name encapsulates your sound?

Dan - I don't know many bands that have names that really do that. Besides metal and hardcore bands where you pretty much know what your going to get by the name (no one really expects a ballad from Cannibal Corpse), Sonic Youth is one of the only bands I can think of where you can almost hear the music reading the name - that could also be my obsession with them talking. So, no - I don't think it does. But I also don't know what would.

SM - You've listed references in the past such as Swervedriver and Polvo, both of which make sense, but is there any J Mascis lurking in the darkened corners here? Particularly on the opening of 'Bill Cosby In Glamorous Chains', to me it smacked of Dinosaur Jr's dissonant guitar wail...

Dan -Dinosaur, Jr. are a HUGE influence on me, personally. The first time I heard Bug, I almost lost my mind. They took these walls of sound and made something so beautiful with it. For me, it was like they took all of the abrasive and sort of off-putting pieces of noise rock and made these really pretty songs - but, at the same time, they are the loudest fucking band I have ever seen play live. There are still parts of songs like "Little Fury Things" that give me chills. I'll put it this way, if My Bloody Valentine has you listed as a huge influence, you know you've done something right.

SM - All right then, for a bit of fun, if you were to shoehorn yourself into a genre, or to give yourself a label, what would it be?

Dan -That's hard - and not because we are so wildly different from anyone else - but because we're all coming from so many angles, influence-wise. I mean, it's rock music - but It's not punk, and it's not just noise. It's not quite dreamy enough to be shoegaze, but it's also not hard to hear all of those pieces sneak in. I think the sound lends itself to sit beside a lot of different sounding bands, which we really like. When people ask us what kind of music we play, I just say "loud". It's not much to go on, but at least you'll remember to bring earplugs to a show.

Dan -Lyrically, no. But that's not our goal by any means. There are plenty of bands with great things to say, and to try to imitate that doesn't interest us. Though you'll hear a lot more vocal tracks on the newer stuff, it's still not where our focus lies.

SM -Is it your MO to do little recording or gigging, just disappear to the back of the queue, then jump back out at people at an unforeseen moment to remind us all that you are here? Or is it more of a Marty McFly/Doc Brown moment whereby your Delorean gets stuck in the nineties on a regular basis? (AKA Will you do more stuff?)

Dan -We've been playing a lot more this year and will probably continue to do so. We actually just finished recording a six-song EP which should see the light of day in some format by early next year. So yeah, we took it slow in the beginning (a few of us were in other bands when it started), but it's gaining some momentum for sure.

SM - Any thoughts towards travelling abroad, preferably to grace the presence of us wee UK dwellers?

Dan - Lots of thoughts, but no specific plans. We'd rather tour over there then here!

SM - Boston has carved out some pretty rocking musical niches in the past. Whats the scene like at the moment in your opinion?

Dan -It's always been a little cluttered in Boston, in my own opinion - tons of bands for such a small city. And it's no different now. There has always been a wealth of amazing stuff happening here - and there is a lot of stuff going on now that people (myself included) just never hear - tons of little scenes. The bands that play the big rooms here, however, might not always represent the overall city in terms of diversity. Check out a show in a basement (it really is still 1994!) and you'll hear some great stuff. Young Adults, who I know you've mentioned in the past, are a great example of some of the coolest stuff going on out here. They're definitely starting to take off (as they should). We're excited to see what else comes next. The great thing about playing smaller shows around town is you just see cool bands that you might not have otherwise. There is no doubt that great stuff comes out of here - remember the Swirlies?

SM - If you could support any band in the world, either existing or defunct, who would it be and why?

Dan - For me, it would be Sonic Youth. And that is because they are the best band that has ever happened. (Besides the Smiths, but I can't even joke about playing with them...)

The new Autolux record is pretty amazing. There is a band out of Canada called Women that just put out a pretty awesome follow-up record, too. But to be honest, I don't have that much new stuff...

SM - Well that's more than enough! Two of our favourite albums too. Finally, what is sonic masala?