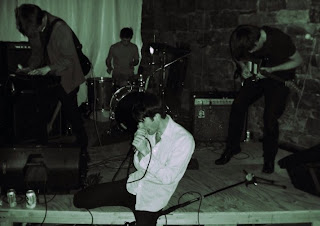 There is something serendipitous about the sudden rise in interest in dirge punk slackers Pop. 1280. I went on a Jim Thompson reading frenzy about two months ago, reading The Getaway, The Killer Inside Me, The Grifters, and finished with Pop. 1280. For me, this was the best of the four, which is saying a lot considering the high caliber offerings that the other more famous noir tales offered. There is just something to Sheriff Nick Corey that supersedes Lou Ford in The Killer Inside Me - maybe its the fact that Corey is a scheming psychopath from the beginning, and it is slowly shown as the story unfolds. Anyway, its a brilliantly dark piece of art.
Which leads us to Pop. 1280, the band. Besides from choosing an amazing literary tome as their moniker, these New Yorkers dole out a vicious slice of visceral squalling post punk that is spat at you with violent disdain. There is more than a dollop of Venom P Stinger in Pop 1280's poisonous sonic stew, with a light pinch of Twin Stumps for that added kick...in the teeth.
The prowling, sinister groove permeates their sound, best heard on their Bedbugs 7". Now with The Grid, their forthcoming six-song 12" out on Sacred Bones, you can discover the fervent, fevered urgency for yourself. And to promote their new release, Pop 1280 are doing some incessant touring of parts of the US in November, most notably on the 6th in Columbus, Ohio, where they are playing alongside SM faves Puffy Areolas as well as the excellent Cheater Slicks. These guys are gonna produce something special in the next twelve months - you heard it here first.
Pop. 1280 - Step Into The Grid
Pop. 1280 - Bedbugs
Posted by Brendan T