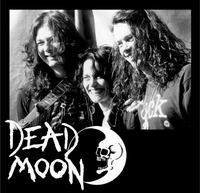 As I have explicitly noted over the past week, the idea of this blog is to explore music that we love. So of course it still holds a level of bias, as the love of music is extremely opinionated. Nevertheless, Im never far wrong (gulp...), yet am always open to revisiting sounds that I had hitherto overlooked, passed up on or simply forgotten about.
Im posting about these guys, Dead Moon, because I was cyber-bullied into it. Yep, the internet is a big bad place, especially the detritus that reside on that Facebook site... My friend Will basically asked me on Facebook to write about em. They are pretty good, so I will, ok Will?
Dead Moon have put out a plethora of down and dirty garage releases over ther 20 year career that ended in 2006. Fronted by husband and wife Fred and Toody Cole, and pumped up in the back by skinsman Andrew Loomis, the trio worked hard at taking their country and punk influences and running them through a rusted steel metal press, and coming out the other sound seemingly of yesteryear, decidedly DIY and yet inexplicably fresh. Their success was a strange beast, as they went largely ignored in their native US of A. All of their work was generally self produced, and only through the interest of German label Music Maniac did they tour far out of their Portland digs. Therefore they found themselves with a wider fan base in Europe than elsewhere...
Dead Moon also were amazing in the way they went about mangling other people's songs, indelibly marking them as Dead Moon originals. Bowie, Hendrix, Zeppelin, Dylan - Dead Moon went to the greats and then ravaged them. Fred Cole with his occasional resemblance of a slightly more stable Bon Scott, proved to be an amazing voice for the garage rock movement, with Toody the perfect foil that provided the grace that is often remiss of such acts.
Their disbandment in 2006 was a shock in that Dead Moon still rollicked along like a red eyed steam train out of a hellmouth. Their strength and commitment to the cause of rock and roll still ran strong, through their strong Tombstone label and their prolific output - 2006's inadvertant farewell record Echoes of the Past still showed that the Coles and Loomis still had more soul than most new bands of their ilk. Fred and Toody didnt stop there - in their fifties, they still shoulder the burden of rock diehards, through the formation of their current band Pierced Arrows.
Pearl Jam are the most obvious influence in the USA, as they regularly cover 'Its OK' as well as occasionally dropping (in my opinion) better track 'Diamonds In The Rough'. Dont hold this against them, this just shows how far reaching Dead Moon's influence should have been - Vedder is a renowned purveyor of obscure music, therefore if their name was out to a wider audience, the repercussions could have been scary.
So thank you Will for reminding me of this stellar DIY garage act. Now I implore you - hunt down Strange Pray Tell, Dead Ahead or The Graveyard - those three are great starters - then get into their entire extensive back catalogue. You'll be eternally grateful. Also, try to stay vinyl - the cracks and pops add so much to every song its magical in a sepia toned soundscape.
Dead Moon - Can't Do That
Dead Moon - Diamonds In The Rough
Dead Moon - Hey Joe (cover version)