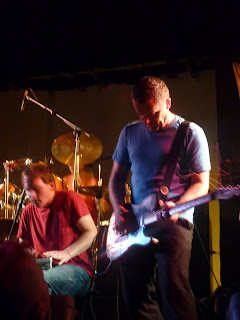 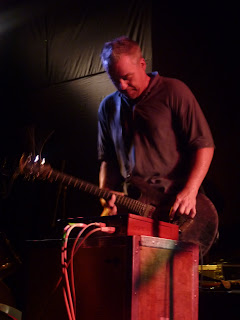 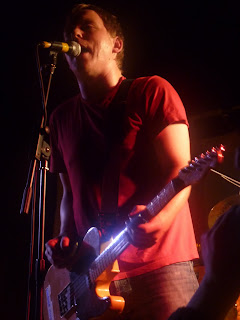 Tufnell Park's The Dome holds a special place in my heart. It seems I only ever make the trek to this part of town for obscure or experimental acts that continually exceeds my expectations. Case in point - Lightning Bolt, December last year. Was much better than I even thought would be possible. Furthermore, The Dome has a penchant for gigs where the support slots are just as good as the headliners in their own right (from same December gig, Drum Eyes blew me away). And, of course, there are the cheap pints of Guinness. Where do you find a £3 pint of the black stuff? Nowhere, especially not at a gig venue. So the excitement is palpable (always heightened due to the fact that its an Upset The Rhythm show) as I venture up the stairs into the town hall-like arena to finally see stalwart (and still very much relevant) Dutch post punk pioneers The Ex.
First up though, the supports. Nonhorse hits out first, and is an intriguing mix of tape manipulation and noise extrapolation that deserves more than the meagre crowd that is on offer. Nevertheless, Mr G. Lucas Crane knows what he's doing, and the violence he wrangles out of his instruments is justification for further investigation...
Nonhorse - Noxon
Next up are London mainstays of 2010 and UTR 'veterans' Trash Kit - if you haven't seen them playing a London venue yet this year, you haven't been outside. Having forgone the kitschy makeup that was a trope of previous shows and emblematic of the band, the Dalston three piece nevertheless stay on the path they have carved relentlessly since making a name for themselves supporting the likes of Vivian Girls and Tune-Yards. Their jangly, discordant tropical punk pop is effervescent and addictive, with nary a toe being able to resist being tapped. However, as the confidence of the girls grows, so do the songs, so much so that there seems to be something dangerous lurking underneath the veneer of these quickly cut slices of rock. You feel that Trash Kit are gearing up to cross over into a Dark Side that will explode their, and ouw, minds. Once again, Dalston has been done proud.
Trash Kit - Sun Spots


Now, Nisennenmondai. Three girls from Tokyo - one a tall, lithe model-like beauty (bass), one a small, no nonsense type (guitar), and one the unassuming type at the back. I wasn't sure what to expect - 5678s? Shonen Knife? Fuck no. The next forty minutes was nothing short of mindblowing, visceral noise. There's motorik, there's Krautrock, there's no wave, there's disco - but above all, Yuri, Sayaka and Masako deal a neat line in psychotic noise. Highlight? The maelstrom that is Sayaka's monstrous drumming, all flailing limbs, seat jumping and gnashing teeth. Brilliant.
Nisennenmondai - Sonic Youth
I was unsure how The Ex could top such face melting competition, but the veterans of over 1400 live concerts came onto the stage without much ado and broke into their trademark post punk with gusto. So much gusto that (I feel ashamed to say) they made Gang Of Four look even more like poseurs than they already do, and whilst I love Wire, their relevance withers in contrast to what is on offer here. What the next hour showed was a band that is continually evolving and experimenting whilst still rising against the perceived political injustices of the world. Even with the altered band dynamic of the introduction of singer Arnold de Boer, the vitriol still exists - with the electric manic guitar interplay between Andy Moor and Terrie Hessels, with Katherina Bornefeld's insistent drumming propelling the group through a rollercoaster set. The set list may have focused heavily on latest LP Catch My Shoe (which, by the way, is a incredibly strong record, and seeing as it is their 25th long player release, this is a remarkable feat), to truly showcase the new band, but it also proved that the Ex, 30 years on, still not only have relevant things to rail against, but still remain ultimately relevant. By the end of this show I was knocked by how fresh the agitated post-punk all seemed. It was a frenetic show all round. The Ex will not lie down; the Ex will not go away; the Ex will never die. And for that we should all be eternally grateful.
The Ex - Cold Weather Is Back