Greenspon Takes Some Common Objects Over The Threshold 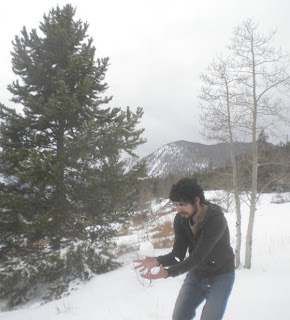 Kevin Greenspon, the sole driving force behind excellent DIY label Bridgetown Records, has been prolific in his own right, throwing out releases, singles and splits all over the shop. His last, the ten song split with Dylan Baldi AKA Cloud Nothings, was a sharp sliver of fuzzy punk pop that at under half an hour didnt outstay its welcome whilst enticing you to repeated listens - a sizable feat indeed. But the 23 year old LA native refuses to rest on his laurels, having completed a tour with Vehicle Blues and starting up afresh with Nicole Kidman (no, not the Aussie actress, but the eccentric freak folkster). In between all that and the production line of his label, Greenspon has quietly brought out Common Objects, a 12" vinyl effort out on Family Time Records. The record has Greenspon in his guitar collage mode, providing ambient soundscapes that whisper at your heels like tendrils of mist, slowly rising up to envelop you. The first track offered from it, 'Threshold', is a fair indicator of what to expect. Make sure you support Greenspon and his efforts - his efforts are well received, well packaged, and well worth your time. Pick up Common Objects here.
Kevin Greenspon - Threshold
Posted by Brendan T