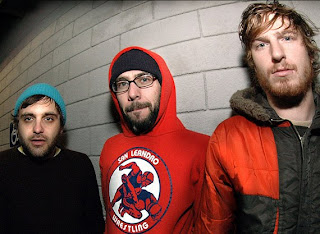 I hadn't heard of Tera Melos before listening to 'Frozen Zoo' off their latest album, Patagonian Rats. The Californian three-piece have crafted a track here that, whilst having some of the dissonant and jarring stop start rhythms of the math rock staple, there is an element of jazz/folk improvisation that lends itself more to a quirker, more precise yet still very indie sound. However, when searching the internet I found some irate comments about the poppification of what many fans felt was a much more innovative and harder edged sound. Delving further I found that Tera Melos have toured with the likes of These Arms Are Snakes, Melt Banana and By The End Of Tonight, laying some credence to these claims. Then I noted that their upcoming tour is with Maps & Atlases - and that helped to explain the change in musical direction. Nevertheless, it had my interested double piqued - to see where they had started, and to see what Patagonian Rats had done to bring about such ire. Coming at it from such an angle means Im probably less biased than some, but I found their older stuff to be really fun and powerful, whilst the newie was even better in that its exploration of pop sensibilities hidden within the nooks and crannies of the supposedly sterile landscape of math rock. I think Patagonian Rats is very exciting stuff, and with its bizarre leanings and propensity to delve ever so slightly into Mars Volta-esque prog territory ('Skywatch'), I think Tera Melos are a new band to take account of, revel in and enjoy their unique vision of the future of guitar rock. They claim to sound like Harmony Korine and Mark Borshact in a punk band - not far off the mark there...

Patagonian Rats is out now through Sargent House.

And here is the film clip - weird... (UPDATE - this version of the clip actually works!!!)

Email ThisBlogThis!Share to TwitterShare to FacebookShare to Pinterest
Labels: By The End Of Tonight, Maps and Atlases, Melt Banana, Sargent House Records, Tera Melos, These Arms Are Snakes.