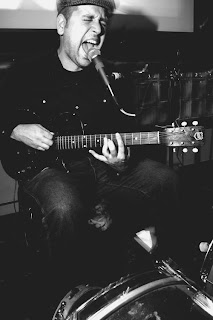 Mark Sultan is a demi god of the modern garage movement, both under his own name and as the 'BBQ' in King Khan & BBQ Show. His myriad releases on esteemed labels such as Sub Pop, Bomp!, Norton and In The Red have been all of at least good quality, and has spawned a great number of worshippers, some of which include Bradford Cox, Jon Spencer and the boys of Black Lips - the latter formed with him to create messed up shit as The Almighty Defenders (I really oughta dredge that up for y'all sometime...)

So Sultan is pretty big business...well, he fucking well ought to be! Therefore when the penny drops on the grapevine that he is to release new material, the hairs stand up on the back of my love handles. $ is being put out on Last Gang Records, and under his own name Sultan has managed to not only divulge in his love of doo-wop (which has now taken on credence in other, hipper circles), but in psych, country and noise. This is an album to be sought out, which you can do on Monday November 8th.


Until then, feast your eyes and ears on first cut 'Status'. Welcome to the weekend...