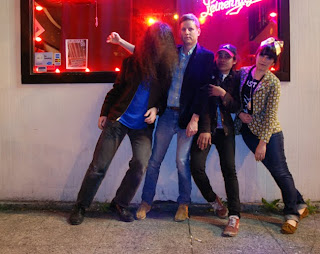 A couple of friends of mine were mega excited of death a few months, as they had procured tickets to see a one off show of Seattle garage puke rockers the Intelligence (the other project fo A Frames' Lars Finberg). Such fervent excitement quickly turned to sour disappointment when the band werent allowed into the country - visa hassles and what-not - can someone please sort out the Border Office??? What added to their torment was the fact that after regaling me with this story, I pretty much told them that the Intelligence were shit anyway, and continued to drink my pint. It was only a joke, but the looks I received made me think I was to receive my first double glassing from mates...
Such hiccups have never stopped The Intelligence from rolling right along however, as the release of their new LP Males showcases. Put out by In The Red Records, Males is their 7th album proper since their inception in 1999 (if you count Let's Toil, which is debatable, but I do), and it is an album recorded with a full band in tow. I dont think it is a lick on previous effort Fake Surfers, which is amazing and you should check it out RIGHT NOW, but the track below is a great snapshot of Finberg's biting lyrics (a la Mark E Smith at times...) and the down n dirty approach to grinding out a garage rock tune. I also think that whilst Males is a little bit of a downturn for them, their next output (if they stick together) could be their best thing yet - new band members include past members of Eat Skull and Karate Party.
The Intelligence are romping around the US on a month long tour now, so catch them if you can.
The Intelligence - Like x 7
Posted by Brendan T

Email ThisBlogThis!Share to TwitterShare to FacebookShare to Pinterest
Labels: A Frames, Eat Skull, In The Red Records, The Intelligence