Watching The Sun Shine From The Roof - An A-Ha Story... 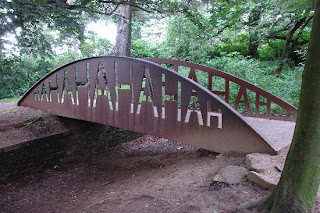 This post is something of a first for this blog, as the title may suggest, but hear me out...
Sonic Masala has in essence been created by Paul and myself as an outlet for us to talk about the music we liked, sometimes discussing issues and events in the music world that affected us, and hopefully provide a forum where people could come and discover new music to enrich their lives or to offer new music that would enrich ours.
At no stage in the genesis, embryonic and infancy stages of this blog was it ever discussed - or even subconsciously thought - that a-ha would become a focus of interest.
But this story isnt about my 'turning to the dark side'. No. Instead its a tale of inital woe that immediately sweeps up into a transcendental victory for music lovers everywhere...I think.
A couple of weeks ago (Friday 8th October to be exact) I found myself, at the end of my first full day of gainful employment for a month, being dragged along to the Royal Albert Hall. This esteemed venerable venue has been a bastion for high quality musical performances of all persuasions, as well as a beautiful architectural marvel in and of itself. I had never been inside, so I should have been excited. I wasn't. I was apprehensive and a little fearful instead.
My partner in crime, Alison, an advocate of all things 80s, had gotten the tickets for a-ha with her friend some months ago, and had been building up her excitement incrementally from the day she had paid for them, despite the odd moments of ridicule (mostly from my friends). At the last moment, her friend pulled out on her, leaving a free ticket. And I was the last resort. I was dreading it, but it was a chance to see the Royal Albert Hall, no?
a-ha, a Norwegian 80s Europop behemoth, released the single 'Take On Me' in 1985 and exploded on the global pop culture consciousness, both through the song itself and the famous animated music video that accompanied it (which, I must admit, is still an awesome, if decidedly cheesy, vid to this day). But after that, in my own worldview at least, a-ha ceased to be. Maybe they literally exploded after the mega success of their first single, hence never having really heard of them again. But on my way to the venue, I was schooled in the ways of a-ha, and in particular the aceness of their first album, Hunting High And Low. You see, as well as being a part of the global farewell tour (in a truer sense than most reformed acts these days, as a-ha never broke up, and in fact released their ninth album last year!), it followed the other popular trend of playing one of their albums in their entirety.
I was enthralled, you can imagine...
Let me cut right to the chase. We had the cheap seats - the gallery, which felt as far from the stage as the International Space Station. Hell, at least the ISS had telescopes. It looked like the night could be a disaster - or in my eyes, par for the course.
But then the band members (Morten Harket, Magne Furuholmen and Paul Waaktaar-Savoy) came on, backed by a 25 person orchestra. And seeing as it is the opening track of the album, they open with 'Take On Me'. Despite the average audience member being in their mid to late 30s, this is the closest Ive ever been to a rabid pop concert. The sound of the screams as Harket sang that first line threatened to deafen us up in our lofty perches. And it never abated - the fervent adulation, nor the quality of the show. These guys could play! Possibly aided and abetted by the fact that their sound has evolved with the times as they have never stopped playing, the songs, whilst obviously written in the mid 80s, had a modernised spin on them, and the back orchestra heightened this sophistication even further. 'The Sun Always Shines On TV' was one of the best songs Ive heard performed all year. And as they closed off proceedings with 'Here I Stand and Face the Rain', elongated by some elegiac orchestral interplay, I was swayed. And although they had an unusually long 'intermission' - I dont care if there's an orchestra, or that they are in their 40s, over half an hour is a joke - they came back to perform the majority of second LP Scoundrel Days, an unexpected delight.
And this is the crux of this argument. The entire night was unexpected. I havent been irrevocably changed by the endeavour - I dont own their entire back catalogue; I dont even own one release, and am very unlikely to ever have one in my possession - but it helped to highlight the power of music, regardless of the angle that it comes from. It is ridiculous to close yourself from something without at least sampling it yourself. And as the unlikely heroes of the day a-ha showed me, you cant beat a perfectly crafted pop song...
a-ha - The Sun Always Shines On TV
Posted by Brendan T