Torching UFOs on a shoestring budget 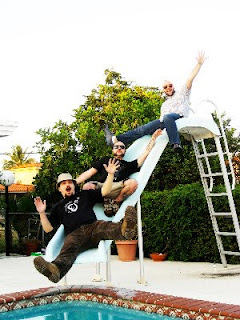 Torche's LP Songs For Singles has been out for a little bit, am yet to procure it, but Im sure it is awesome. Out on Hydra Head Records, home of brilliance such as Jesu, The Austerity Program, Helms Alee and many many more, Torche released single 'UFO' albeit without their own lyrics, instead superimposing some Van Halen howling over the mix. It proved to be a bona fide smash, at least as a novelty item. Now its time to hear it as it is truly intended, and while we're at it, here is the music video. Amazing CG here guys...

Torche are playing the UK in November - especially salivatory is their mooted show with Part Chimp and Chickenhawk - but that is an exclusive Leeds show - fuckers! Still, for us Londoners we can revel in Torche's brutal dirtiness at the Garage on the 22nd November.

And while we're at it - here's another new Torche track!