The Clouds will leave you for Nothing 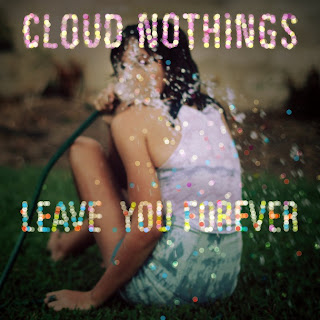 Dylan Baldi is a vivacious young fellow. Under his umbrella guise of Cloud Nothings, Baldi had pumped out many releases and scraps of material that has flooded the world with his brand of bedroom bliss punk pop. We mentioned his split with Kevin Greenspon on Bridgetown Records last week. As I stated there, Baldi had laid his claim that his sound was going to be cleaner from here on out, and although his latest release, the Leave You Forever Ep (out through True Panther Sounds) is steeped in the lofi sentimentality that many of his ilk have fashioned their sound with, the briskness and lack of unwarranted fuzz has actually opened the songs to a new level of saccharine beauty and fun that were thus far buried and left to find with a heavy duty metal detector. There are few that are within shouting distance of writing such great pop songs - Beach Fossils maybe? - and the fact that Baldi is only 19 and is constantly pushing the boundaries of his vision is inimitably exciting. (Oh, and if you havent already, check out his album of last year Turning On - its damned fine).
Cloud Nothings are, after playing a brace of US shows supporting the likes of Wet Hair, Prince Rama and the aforementioned Beach Fossils, will hit the UK with local outfit Veronica Falls, taking Electrowerkz by storm on the 5th of November. A good way to celebrate blowing up Parliament, no? Also, Electrowerkz is in Angel, a warehouse club, so a strange venue choice, which should make it all the more interesting and fun. Then after all THAT, they open for Les Savy Fav across the European continent. Yep, that Baldi character is one vivacious fellow. And its about time that people started bopping along to his tune.
Cloud Nothings - Leave You Forever
Cloud Nothings - Weird Son
Posted by Brendan T