Pixies Are Sending Their Love Down The Well... 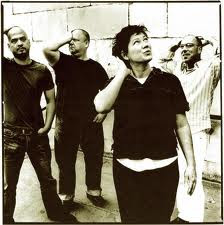 An amazing true-life story came to its uplifting conclusion this week when 33 Chilean miners were finally extricated from the San Jose underground mine where they had been trapped for over 70 days. I know a few people who got a little misty-eyed when the first miner came out of the rescue capsule - no names of course...
As luck would have it, the Pixies were playing in Chile the very day the men were rescued. In reverence to the miraculous event, the Seattle quartet played a 33 song set, a song for each miner. A small homage, sure, but still a very nice touch from one of the world's greatest acts.
Well the hats off approach has now been extended to their myriad fans, as they release a free Pixies live EP in reference to their show in Mexico City. Hola From Mexico City is available on the Pixies website here - it has a great sample of their live essence. I heard this from the band Interpol, of all people, who are playing with and are devoted acolytes of the Pixies.
Pixies - Gouge Away (live in Mexico)
Posted by Brendan T