Austerity...With An Air of Abject Brutality 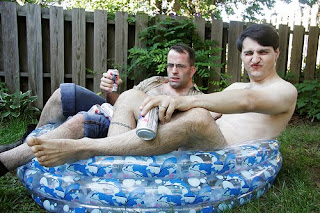 As I mentioned about a month ago, Torche are releasing their new LP, Songs For Singles, through Hydra Head Records. Since then all I have done is immerse myself in HH's catalogue of amazing loud aggressive releases - Helms Alee's Night Terror being the one of note in the past fortnight. Whilst over there I picked up a free sampler called Phoning It In - go on, you go do it too! And apart from reiterating why my mate from Oz Jason thinks Pyramids With Nadja's release from the beginning of the year is killer, it also brought to my frontal lobe The Austerity Program.
This two piece deal in dark aggressive attacks of noise sustained by a staccato drum machine. Imagine if you will that Nine Inch Nails had been formed by Steve Albini. Their album of '08 Black Madonna is a dark minor masterpiece, and the strength of that drawn out affair is honed to even stronger levels on new EP Backsliders and Apostates Will Burn.
I fucking love this band.
I know that sentence (either verbatim or in a paraphrased form) gets bandied around here at SM - mostly by me - but you may notice that I never stand down from these notions. They are not kneejerk reactions. Anyway, regardless of the past, The Austerity Program is a different beast - it sounds like it was formed from Satan's loins with me expressly in mind. Think new musical acquisition Helms Alee, some Shellac, a sprinkle of industrial noise a la Nine Inch Nails, a smidgen of Minutemen, and a healthy dose of nihilism, and the brutally seductive elixir is complete. This EP is angry, funny, stark, serrated, and oh so addictive.
The Austerity Program - Song 27
Posted by Brendan T