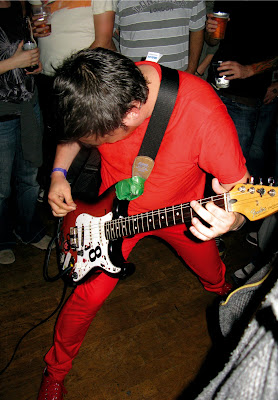 Sonic Masala has one rule when it comes gig going... NEVER MISS THE SUPPORT BANDS! You never know what fledgling genius you might stumble upon.

This year we've been privileged to witness some great gigs, something Brendan has rounded up, but a blog like this wouldn't exist without the bands that prop up the big name at the top of the bill. We've discovered many gems doing the hard graft in a supporting role this year, sometimes by accident, sometimes by design and sometimes we've gone just to see the support band in the first place (of course we hung around after). In many cases the support band in question has shone just as brightly, and sometimes outshone their soundcheck-indulged, rider-demanding, bill-topping peers. In truth though many gigs are so well thought out (thanks Upset The Rhythm) that they don't really have a pecking order. In these cases you go to see one band and leave with two or three new faves, everyone is a winner.

So below in no particular order is a list of bands that have rocked up in a supporting slot this year and blown us away. In places it shows just how far some of them have come, in others its a glimpse of the treats that 2011 many hold in store.