Not Not Metal Matrix Vamp 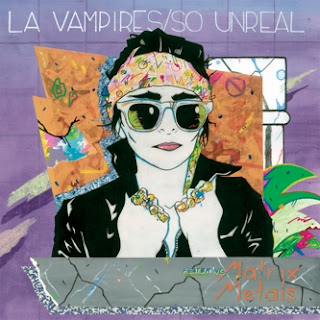 Now it wouldn't be a set of Not Not Fun posts without mentioning Amanda Brown's other project LA Vampires. It's been a busy year for the LA Vampires persona. LA Vampires have dropped no less than three collaboration chronicles this year. First was the warped Psychic Reality split, more split than collaboration in truth, that dropped back at the start of the year. Then of course there was the darkwave/noise goth genius that was the LA Vampires Meets Zola Jesus E.P, an E.P that I still maintain is one of the best of the year, it was a revaluation. And now in yet another twist of LA Vampire warped, head fuck magic there's this collaboration with the elusive Matrix Metals, the So Unreal long player that dropped last month.

So Unreal, to lift a term straight form the Not Not Fun write up, is just that So Unreal. The project was first hinted at with the surreal video for track 'Make Me Over' and then followed up with the vid for 'How Would U Know' below. In So Unreal the unlikely partnership of Matrix Metals, LA Vampires really has coaxed out a new and slurred world of distorted rhythms and blurred beats. Track 'Berlin Baby' sums it up for me, a drug hazed Berlin basement, full of echoed and sick pop vocals, caught in a soup of marshmallow grooves and textures. Matrix Metals is aka Outer Limits Recordings and those sensibilities apply here in every way, name included. If LA Vampires' work with Zola Jesus pushed new surreal territories of dark goth noise then Amanda Brown's latest work with Matrix Metals really is pushing it to every kind of outer limits. Not Not Fun hints at more collaborations to come next year, I can't wait. Out on Not Not Fun, naturally, buy here, taste below.

LA Vampires and Matrix Metals - Make Me Over


LA Vampires feat. Matrix Metals - How Would U Know from Not Not Fun on Vimeo.
Posted by Paul M