The Future Of The Left Is The Least Of Your Problems 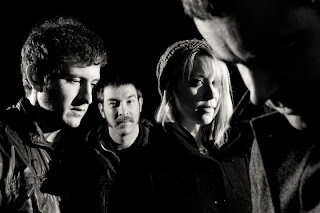 Travels With Yourself And Another was one of the best albums of last year, and Cardiff's Future Of The Left are prepping their as yet unnamed follow up. They have gone through a line up change, with Kelson leaving the band halfway through the year, but as the picture above suggests, they are charging ahead with not one but two new additions to the fold. Falco is as raucous and acerbic as ever too, if the demo version of 'I Am The Least Of Your Problems' is anything to go by. Check out two other demos, ''My Wife Is Unhappy' and 'Notes On Achieving Orbit', here. They are doing a final show in Cardiff tonight, plus a couple shows in Germany and France, before they head Down Under for a tour in the summer sun - smart idea. They play in Brisbane January 3rd - wonder if Ill be lucky enough to catch them there???
Future Of The Left - I Am The Least Of Your Problems (demo)
Posted by Brendan T

Email ThisBlogThis!Share to TwitterShare to FacebookShare to Pinterest
Labels: Future of the left