This is the first post about a band called Adebisi Shank 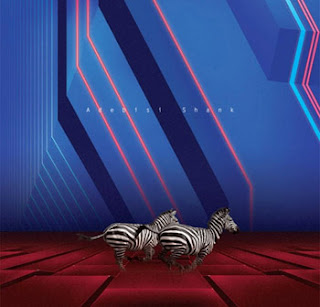 Before you draw your own conclusions the dress in question was in fact a Kilt, I was at a Scottish wedding, being best-man is a tough gig. Writing posts is one thing but writing speeches is another. Anyway it was a great weekend except the trip home, snow kept us at the airport for an hour and a half longer than necessary, but I too had an apt soundtrack to take me far away from the troubles at hand.

Its often said that an album or band 'can take you to a different place'. I often find that certain albums achieve this effortlessly, they drag you, sometimes willingly, sometimes kicking and screaming, into their own worlds. Some albums on the other hand take multiple listens to unlock their hidden realms and some, as is the case with Irish Adebisi Shank's second long player, take a special set of circumstances to really show you the door to their own bizarre land of discovery.

Now I've been listening to Adebisi Shank's second L.P, conveniently entitled This Is the Second Album of a Band Called Adebisi Shank, on and off since it dropped way back in August, but its crazed twist of sci-fiesqe post rock never really stuck, but it did tempt, so I kept on returning.

So when I finally settled into my seat on the flight home from snowbound Glasgow, for some reason the album that I picked to take me away from the hells of air travel was Adebisi Shank's. I'm still not sure why I picked it, but in that moment I was off to a different world altogether, carried away by the strange meaty, twisted guitar riffs and thudding bassline, it was like diving head first into a 70s sci-fi space drama. You can almost picture crazied Japanese manga robots marching across time and space wielding laser guitars. Yeah sure, it was almost cheesy sounding at times, but this is travel music of the future and all of a sudden my budget flight was transformed into space quest 3000 from the planet post-rock.

This might have been an overlooked album of 2010 for me but given the right time and place it was spot on. This Is The Second Album Of A Band Called Adebisi Shank is out on BSM Records, try it sometime.