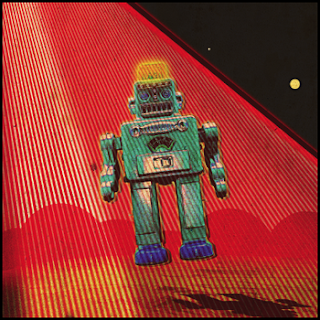 Over the past month or two Ive been mentioning a slew of NZ acts that I think are pretty special - Surf City, Secret Knives, The Mint Chicks, Die! Die! Die!, Paperghost, Glass Vaults, FATANGRYMAN, Popstrangers... But what people outside of New Zealand may not realise is that the majority (OK, all) of these acts come from the North Island. Now, Ive spent my fair share of time around Christchurch and the South Island, and there didnt seem to be much of a burgeoning music scene bubbling under the surface - unless you're into dub, then you are pretty much set. (I must admit though that I havent been there since 2006, so that is a lot of time between drinks of Speights...)
T54 are determined to prove me wrong, and if they are anything like the Russian tank they are named after, I best get out of their way. They have an EP on its way on Christchurch label Gold Sounds called Drone Attacks, and if 'Julie K' is anything to go by, they have a record collection solely made up of My Bloody Valentine and Sonic Youth, along with a healthy fixation on Japandroids' Post Nothing and Male Bonding's Nothing Hurts. Which is fucking great. Where were you guys 5 years ago when I had to gnaw off my own arm in Christchurch just to have some aural anarchy? Sure, its beautiful and all, but still...Im a convert. I had dreams of moving to the Canterbury region back then, and if there is a scene like this being mustered, I may just go back to that dream...
Head over to their bandcamp and not only can you pick up 'Julie K', but a list of demos (which features some Dick Dale-isms along with their no wave love) they did under the name Superdicksystem, a play on a 90s album by NZ band The Feelers. I agree with the sentiments...
T54 - Julie K
Posted by Brendan T