Dont Live With Yourself Without Emeralds 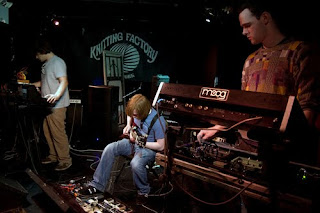 This is a double post, for two reasons. Firstly because these two releases are interlinked. Secondly because they are two of the best albums of the year, hands down. And if I never gave them the attention they deserved, I may as well pack up Sonic Masala right here and now. 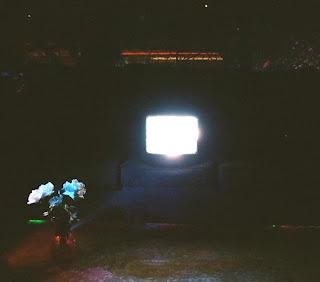 First up, we have Emeralds, a band I mentioned relatively quickly - no, uber quickly (I listened to Lake Snow Effect without knowing a lick about em) here. The trio from Ohio have been together under the mineral moniker for just over 5 years, yet their output is astounding - combining their CD-Rs, cassettes and 'proper' releases they are close to clocking half a century of material. Each piece emanates from a mood and space in time - tempo, length, technique often slides about from one touchstone to the next, yet every piece is unequivocally an Emeralds gem (sorry...). Dipping their toes in everything from post rock, ambient minimalism, drone squalls, 80s synth compositions, frequency manipulations and Krautrock, the road they have carved is ever winding and stretches to an indeterminate horizon that is always beyond reach. And in Does It Look Like Im Here?, their latest on Editions Mego, Emeralds have constructed a crystal castle of insurmountable beauty. Known for their improvisations (read: very long songs), the album on the most part tones this down, creating instead a clearer vision of what its like to be caught up in their whirling prism of sound. The way in which each sound wraps around the next in a double helix of noise fuses within an unique DNA, something which many will aspire towards but never achieve, let alone surpass. Does It Look Like Im Here? is such a delight that it hurts my brain to think of the right superlatives - because there arent any. 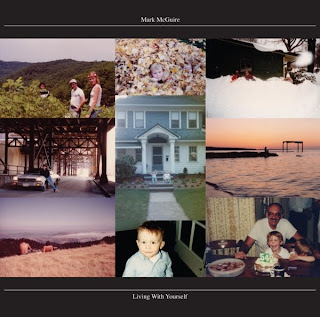 Not content to focus on this alone though, the members of Emeralds all have their own projects. One of the trio, Mark McGuire, released an album of his own, Living With Yourself, a month ago - and in my eyes at least, has matched the majesty of his own output, making an album that, whilst vastly different in size, temperament, sound and scope, supersedes it through warmth and emotion. McGuire's guitar collages are more leftfield when it comes to sonic exploration, and whilst still displaying the adventurousness and virtuousity that is his finger-picking trademark, he changes gear here to tell a much more personal tale. Combining his guitar-driven compositions with home recordings that his father made when he was a child, you get a real sense that this was not just a labour of love, but in some ways a diary, a fond look back at one person's specific yesteryear – with added effects and noise. The bubbling of children’s voices that begin opener ‘The Vast Structure Of Recollection’ is the pivotal moment of the album in my mind, and as the acoustic strummings enter the fray we are transported into a hyper real yet sepia toned landscape of memories. Amazingly, the album plays as a narrative sans vocals (using the field recordings as a common thread like Explosions In The Sky’s ad hoc story of how their van broke down whilst touring, The Rescue), further augmented by the titles themselves. ‘Around The Neighbourhood’ is meandering and filled with ponderous whimsy; ‘Clouds Rolling In’ evokes the darknesses that tinge the moment when a child’s innocence takes its first knock; the melancholic matter of factness of 'Two Different People'. 'Clear The Cobwebs' is the rawest track here, and evokes the feeling of one who has dreamt vividly about his childhood to wake up in a strange room, not knowing where he is, afraid to find out, desperate to climb back into his own brain. But the closer is the clincher. 'Brothers (For Matt)' opens with the recordings of McGuire's father interviewing his sons, primarily about girls, before exploding into a maelstrom of Mogwai proportions - yet if you can take in its euphoric 10 minutes and not feel dampness on your cheeks, you aren't human. Living With Yourself is brilliant - by far the best instrumental record of the year in the sense that it is predominantly one instrument, talking. An amazing feat.

Two breathtaking albums in one year - and McGuire is only 23. Fuck.