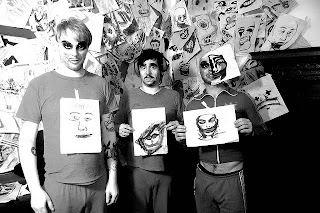 Manchester's Kong holds a special place in Sonic Masala's depraved heart. My first ever review (which was for Low Rise magazine) was at last year's A Fistful Of Fandango gigs. The main drawcard was to see Future Of The Left - who were fucking amazing, I must add - but the first act was Kong, and Paul and I were equally as impressed by their dissonant mess of Shellac-meets-Jesus Lizard sonic vomitings and drunken tirades - plus the red outfits and plastic masks were suitably kick arse. Since then Ive seen them 5 - yep, 5 - times, and regardless of how lucid or fucked up they are, they remain brilliant - one of the best live acts in the UK hands down. What follows is their views on what rocks their world. Not just for 2010, but for all eternity, not ever likely to be broken. May (insert higher being here) have mercy on your blackened souls...

Kong - Top ten of everything ever.

BURRITOS - This is just the perfect meal - meat , veg, rice , beans ,cheese and hot sauce all wrapped up and ready to gobble. No need for plates and forks and shit. They are like the predecessor to the protein pill.

JACK DANIELS & MILK - I like to smash a bottle every day on tour whether I need it or not but you gotta line your stomach with a pint of milk first or you will shit blood for a month.
I used to drink it with coke but the middle of my nose fell out.

BLOW JOBS - Bj's are cool cause they ain't considered cheating if you got a girlfriend and if you're drunk and close your eyes you can get your sweet little merch guy to do it for an extra fiver on his PD's.

DR MARTENS - This line of footwear is amazing, you can wear em to work at the office during the day then go out and kick the living shit outta someone in the evening, just remember to spit n rub the blood off in the morning , I got cherry reds cause Im dopey.

CHAT ROULETTE - Me and Lulu spent around 3 days straight on CR .... I think they should change the name of the site to cockcomparison.com ...it took the 3 days to see just 1 human taco!

ANALOGUE AFRICA - This is my new favourite record label , I love everything they are putting out ...I think their catalogue stops around the mid seventies but thats pretty much where my taste stops.

SCOUCE WOMEN - There is something about those girls from Liverpool ! I love going there, it's like going back to the 80's , side pony tails, global Hypercolour and Reebok Pump . They may spit Macdonald's milkshake all over you when they omit that white noise voice but I like women as rough as toast and reeking of vanilla Impulse.

DAVID LIEBE HART - This crazy mother fucker makes me shit my pants , he is pretty much the funniest man alive and I don't think he knows it .

VHS - Fuck Bluray! I dont care about counting the pubes hanging out of some porners riggot and I can pick up 200 videos for the price of Rambo on DVD. As a kid there was a video van that went round the streets pulling up and renting movies to lazy unemployed fat people - my car is pretty much that van now .

Kong will start 2011 with a bang, touring Japan with 65daysofstatic. If you dont catch them when they get back, you're dumb and we dont know you.

Kong - Blood Of A Dove

Email ThisBlogThis!Share to TwitterShare to FacebookShare to Pinterest
Labels: Brew Records, Future of the left, Kong