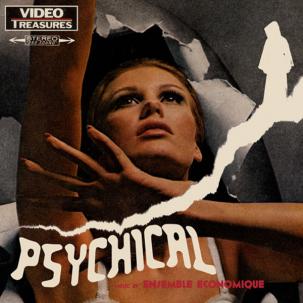 God this is hard. This being the first year of Sonic Masala this is the first time we've had to compile the end of year lists, yeah sure we've done them before, just for the chat down the pub, but committing them to the blog is so much more final, so much more nailed down. So like Brendan mention we sat down with beers in hand last weekend and nailed down our Sonic Masala top ten, we could of done a top 20 or even 40 long players, but we didn't have a week to sit in the pub debating them, much to our annoyance, it took three hour just to get ten! So like Brendan here are my top ten that didn't make that final SM list, plus a few other honourable mentions...
1. Ensemble Econmique - Psychical

I'm sure all end of year lists seem to have a LPs that sneak in at in the last few months and Ensemble Econmique fills that role in mine. A dark slab of future fucked utopia. When I first posted about Psychical I compared it a dark, more twisted, Vangelis inspired ,soundtrack for Blade Runner 2. Its moved on a bit from that lazy comparison to reach new dense haunted depths. Doom drone I've lapped up in the final few months of a fucked up year.

Mi Ami's previous long playing outing Water Sports was massive favourite of mine last year so I came to Steal Your Face with big expections, and the Californian trio delivered in a riot of fast passed snaring fury, funk and tribal rhythms. Delicate and savage at the same an album that can shock and humble in equal measure, and I finally got to see Mi Ami live this year too, winner.

Falling for for this playful wash of noise was inevitable. I've been a keen follower of Cloudland Canyon ever since Silver Tongue Sisyphus, but with this years LP the band showed a lightness of touch to their drone and noise asthetic, shimmering depth and weight that seems to float just like a cloud. I'm sure it's been massively over looked for the touch bliss it really is.
4. People Of The North - Deep Tissue

People Of The North is the side project of Oneida members KidMillions, Fat Bobby and Showtime. I've always had thing for Oneida and their relentless throbbing rhythms, sure Deep Tissue isn't as expansive and conceptually bold as Oneida's releases (what is?) but the similarities are there. Deep Tissue covers familiar ground, its a step into indulgent unfinished business, an personal experiment shown to the world in all its raw, untouched beauty, same themes but left naked and stark.
5. Sun Araw - On Patrol
I really couldn't make my mind up between Sun Araw's On Patrol and Magic Lantens Platoon but On Patrol had to take it. Where else can you hear this level of stoned-out face melting tribal noise slur. A unique record that consumes you rather than just grow on you.
6. Thee Oh Sees - Warm Slime

You got to love the Thee Oh Sees, well ok you don't but spend 30 seconds in the company of John Dwyer and friends cranking it out live and you will. Some LPs sick because the impact the band makes live. I might be guilty of that with Warm Slime but I think its the closest Thee Oh Sees have come to capturing their live energy on wax, and for that its a near perfect slice of garage punk swagger and bravado.
7. Caribou - Swim

If one album has popped up a lot on end of year lists then it's Caribou's Swim, a record I believe was on the cards ever since the track Brahminy Kite from The Milk of Human Kindness, a track that seemed, to me at least, to shape Andorra and naturally evolve to the pop perfection that is Swim. And that's what Daniel Snaith has created in Swim, a perfect pop album that will surly catapult Caribou into the mainstream. For me its the tracks like Leave House and Found Out that show the true quality of this album that and the fact that Carbiou still present a formidable and mesmerising live unit. I just hope it says that way.
8. Pocahaunted - Make It Real

This might of been the west coast psych-dub outfits last LP outing, it might of even been a touch less edgy than previous efforts but it was one of Pocahaunted's best, more straight punk-funk & psych garage inspired than before, the duo went out with a swagger to their ghostly tribalisms, a parting voodoo party.
9. Grass Widow - Past Time

Of all the girl fronted, doo-wop influence, vocal harmony soaked, all girl groups that graced us with LP this year Grass Widow's debut was the best. Better wonky harmonising, better cheeky time changes all left refreshingly garage fuzz free.
10. Titus Andronicus - The Monitor
When I first heard the rumours of Titus Andronicus' plans for their new LP, an album written from the perspective of union solider in the American civil war I was worried, it sounded like it could be a terrible idea, but no this album has more venom and spite than most rock bands managed in a life time, the world is fucked and they're not happy.
Other honourable mentions...
Tame Impala - Inner Speaker
Magic Lantern - Platoon
Tyvek - Nothing Fits
Sex Worker - Waving Goodbye
Autolux - Transit Transit
...I could go on forever but I have to draw the line somewhere. Next up the final all conquering Sonic Masala top ten albums of 2010...
Posted by Paul M