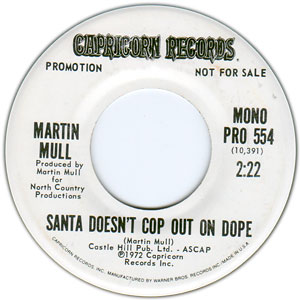 While Brendan has been going great guns on the list spectacular that is SM at the end of the year, you may have noticed (or not) that my posts have been somewhat lacking for the last couple of weeks. Well instead of tapping my keyboard late into the night writing posts, I've been chained to my desk at work till the small hours. I guess you could say that this has meant I'm not really in blog-style Christmas spirit yet, I might even have a grump on. But mental amounts work I can handle; too busy to post I can live with (just); but the one thing I hate this time of year is the music - I hate Christmas songs.

Now don't get me wrong I dig the rest of Christmas, and some Xmas themed songs do hit the spot. The Pogues and Kirsty MacColl's Fairytale of New York has got to be the best festive song out there and maybe I could give time to The Waitresses' Christmas Wrapping. I can't knock Do they Know its Christmas? either. But the twee Christmas shaped dirge out really does do my head in. You know the sort, the I'm dreaming of a White Christmas, big band crooner type, the Disneyesque twee shit that seems to pour out of every tiny shop speaker system from early November onwards. Maybe I'm just bitter, maybe 'cos our otherwise quality work stereo reverts to playing 'Christmas turd' the moment December drops, I can't escape it.

This is not saying that alternative bands don't go in for the novelty xmas track, I don't mind them as such, but they're always done with a healthy dose of tongue in cheek attitude, like you'll never take them seriously. That has to be a good thing - take note Cold Play, wtf?

So with my Scrouge hat well and truly on I give you a late Christmas cover up, one that fits my Xmas song out ook, its the great Sonic Youth covering Martin Mull's Santa Doesn't Cop Out On Dope. The way Christmas songs should be...

p.s Merry Christmas from Sonic Masala by the way.
Posted by Paul M

Email ThisBlogThis!Share to TwitterShare to FacebookShare to Pinterest
Labels: Martin Mull, Sonic Youth, The Pogues and Kirsty MacColl, The Waitresses