Wanna Know How I Got This Smile? 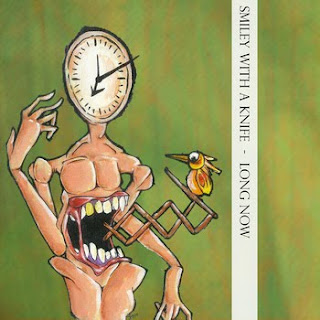 Ive been churning through a list of albums I was sent by a friend back in August, most of them post rock related, and most of them good listens, even if they fall into the trappings of the genre. I love the machinations of post rock, and the bands that do it well, but many end up sounding by the numbers. However, on their sophomore LP Long Now, New Orleans outfit Smiley With A Knife have found a warmth that underlies their instrumental math rock noodlings that has brought their art form to a finely honed edge. There aren't many pretentious meanderings here - each intricate guitar interplay or insistent repetitive rhythm is provided, not just with precision, but out of necessity. There is no fat on tracks such as 'Eygptian Porridge' or the title track - each song on the album has a clearly defined focus, not allowing itself to get carried away with technical proficiency, thus serving a particular purpose that breathes their sound into life. We arent talking Spiderland level of brilliance here - some tracks feel too streamlined, as if threatened to grow Icarus-like wings and fly for the sun - but Smiley With A Knife have stated their intentions, and with this level of focus and determination (and with continued stage sharing with the likes of Tera Melos), expect them to grow in stature as each release is brought forth.
Long Now is out now.
Smiley With A Knife - Long Now
Posted by Brendan T

Email ThisBlogThis!Share to TwitterShare to FacebookShare to Pinterest
Labels: Smiley With A Knife, Tera Melos