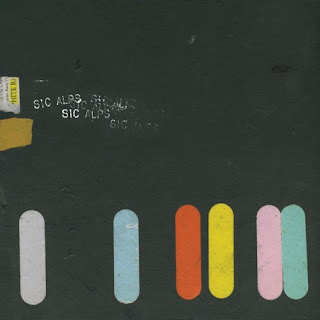 I have two experiences that I can highlight about Sic Alps. One was earlier in the year when around at Paul's place, playing records while we drank at 2 in the afternoon, one eye on the incredibly uninteresting FA Cup final and the other on new design issues with the blog. We'd been listening to Glenn Branca and Women's first album, then I decided to throw on U.S. E.Z., an album Id listened to in fits and bursts but not for a while - and I just about drenched Paul's turntable with spat beer. What have I been doing with my life? Why had I neglected these San Franciscans all my life (well, the last couple years) from destroying whats left of my hearing and my mind? I felt ashamed.
Then they supported Pavement. I was massively pumped. Then I got pissed at the Rest Is Noise, and ended up seen half of their final song - which was ace - and once again I was left ruing what might have been a life-affirming - nay, changing - experience. When Pavement came on, I didnt care anymore. I let myself down, and no amount of heyday slackerdom was going to rise me to the heady highs that I should have been on.
So Im not missing this opportunity. Although it doesnt come out til January, I have in my clammy lil hands Napa Asylum, Sic Alps' new LP on Drag City. At 22 tracks, this is a sprawling and yet succinct record of woozy psych noise, suitably recorded as if in the bottom of a very deep rusted out coffee tin, with the occasional fresh production shining through on tracks like 'Meter Man'. Its warped, its scratchy and fidgety, its as schizophrenic as ever, like a guitar pop band of the 60s stuck in a three decade long trip, with various generational tics seeping in over time. Or like Deerhunter if they just turned it up and didnt get all elegiac on us (actually, not a bad thing, but I still occasionally miss the early days). These guys dont know how to play in any other way - and why should we want them to? The first album to look forward in 2011, I assure you.
Napa Asylum is out January 25th. They are pushing for a European tour around April/May, so keep you eyes peeled, and your trigger fingers over your wallet pockets - its gonna be a wild ride.
Sic Alps - Meter Man
Sic Alps - The First White Man To Touch Californian Soil
Posted by Brendan T