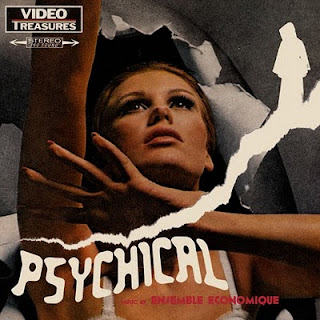 It's only through Not Not Fun that I've stumbled upon Ensemble Economique. But I'm very familiar with Brian Pyle's other project Starving Weirdos. In fact I've met the man himself (at lest I think I did) when Starving Weirdos supported Deerhunter at the Tufnell Park Dome last year or was it the year before? Anyway that night Starving Weirdos' endless drone landscapes seemed to pass over Deerhunter's London faithful, but not I. I was enchanted, so after the show, and a few pints of the black stuff, I headed over to the merch stand and got chatting to Brain. So pleased was Brian that I decided to part with my dosh for a hand printed Starving Weirdos' 12" that a hand printed tee was thrown into the deal too -what a lovely chap!

But in Psychical Ensemble Economique seems to have found a perfect haunted home at Not Not Fun. I don't normally like making comparisons but I can't help with this blast of dark-synth spook. I can't help but think of the classic Vangelis soundtrack for Blade Runner when listening to Psychical. Strange I know, but bear with me. If there was a sequel to Blade Runner, where Earth is even more dark, noise swamped and fucked up, then Psychical would be the perfect soundtrack. Maybe its the synth opening to the first track 'Hail', maybe its the subtle tribal rhythms of 'Red Fro The Sun', or even the doom drone of the title track that grates at the pit of your soul. Its in stark contrast to the light touches of Standing Still, Facing Forward but spot on. If you're looking for a journey into the dense dark future, then this is the drone LP for you, its already slid into my top albums of the year.