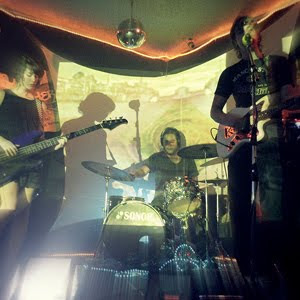 We have posted about Crash Avenue before (especially due to Secret Colours' great debut earlier this year and stunning cover of the Beatles' 'Tomorrow Never Knows' here) and Michael and his crew keep extending their talent. Coming out next month is another from their stable, Alabama's The Sunshine Factory.
Whilst perennial SM touchstones The Decibel Tolls waxed lyrical about this release, going so far as to say that the band should be uttered in the same conversations as Black Angels and A Place To Bury Strangers, I have to slightly disagree. Sugar (out in mid December) is an assured debut, and their adherence to both shoegaze staples and pop sensibilities are commendable. Yet I can't shake the notion that The Sunshine Factory adhere to these tropes too much - try to listen to any track on Sugar and not hear My Bloody Valentine - its nigh on impossible. The mellotron over usage, the treble overloaded vocals, the sonic fuzzed out tsunami of noise - its all been done before, and in varying degrees of greater success.
That said though, it is still a good record. 'Down' and 'Head Becomes The Tomb' have stuck in my consciousness for days, and that is a good factor for the band. And from all reports, their live shows at CMJ last month heralded another great act in the psych-shoegaze mold. But as a stand alone listener, The Sunshine Factory will need to dodge and dance some more before they can break out from under the shadows of the shoegaze greats and start casting their own.
The Sunshine Factory - Down
Posted by Brendan T