Playing Sports On The Weekend...Will Piss Your Neighbours Off... 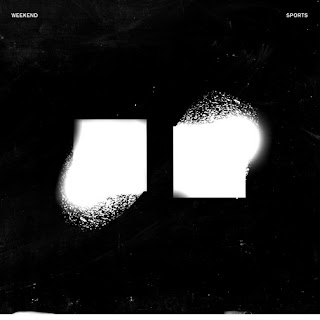 Yeah, here is another loud, fuzzy band that I have been meaning to share for a while. Not to be confused with equally rad Baltimore band Weekends (see, they are plural people, PLURAL!) who put out a fantastic cassette they put out through Impose - chek out here if you missed that one - Weekend are just about to release debut LP Sports on Slumberland Records (having released a 10" previously on Mexican Summer - they are keeping the right company) - and it is very, very good. Opening with noisy jammer 'Coma Summer', these young San Fransiscans lurch and speed through ten tracks of varying levels of feedback-drenched noise, sculpted into columns of infectious pop in the effortless manner that ol' Ed Scissorhands mangles a block of H2O into something majestic and arresting. Weekend have had a extremely fast ride since forming last year (maybe up a 70 degree incline? Thats a pretty fast rise, yeah?), and Sports shows that it was not all hype at all.
If you are in the US, chances are you will be catching Weekend play as they do extensive slots with The Pains Of Being Pure At Heart, after which they'll tour with Young Prisms - lucky beggars!
Weekend - Coma Summer
Weekend - End Times
Posted by Brendan T