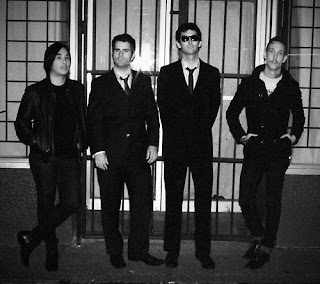 The current craze of delving into the bargain bins at the local record store to find a sound that 'needs updating' continues unabated, with varying degrees of success. As is well known here, I have a real love/hate relationship with the bands that infuse their fuzzy lo-fi meanderings with Spectorish atmospherics, shimmering beach riffs and 'sha-la-las'. Shimmering Stars is another such act, yet they are a lo-fi act that do not hide behind their influences - they inhabit them. This British Colombian outfit have just released a 4 track 7" through Almost Musique today, which you can get here. Its...brilliant. Why? Because it perfectly encapsulates their idols - Del Shannon, The Everly Brothers, Phil Spector - whilst infusing these beloved musical tropes with a distinctive modern edge. Take 'Let It Be Me', which incidentally is an Everly Brothers cover. Whilst it comes across as pastiche at first, a la Spectrals or Dum Dum Girls at their slower moments, their is a decided warmth in the offering, and the reverb used is used effectively, rather than just used. The second half of the track builds and builds as the guitars begin to taken on a wider, 90s distorted rumble, before cascading down in glorious feedback, all in under two minutes. Its an amazingly rendered love affair to these boys' childhoods and their familial record collections. Also check out 'Im Gonna Try', that actually sounds like an Everly's outtake! Im not sure how these guys are gonna travel over time, but this 7" (which, at just over seven minutes long, does not outstay its welcome in the slightest!) is mightily impressive.
Shimmering Stars - Im Gonna Try
Shimmering Stars - Let It Be Me


Shimmering Stars - "Sun's Going Down" from Delicious Scopitone on Vimeo.