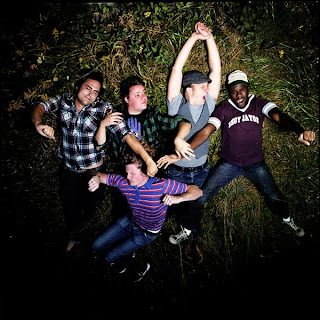 Wildlife are a Toronto five piece that are just prepping the release of their debut LP Strike Hard, Young Diamond, which was also the name of their EP earlier this year (?). First impressions? That this album will be 2010/11's Apologies To The Queen Mary, Wolf Parade's massive opener of 2005. Big call that's for sure, but this quintet already have savvy indie writing chops, a penchant for slightly left of centre soaring melodies and serious bombast. 'Stand In The Water''s plaintive call that 'I can be a good friend, and I can be your lover, but I cant be both of them' is startling and stirring in its strength and purpose, whilst 'Sea Dreamer' holds the rollicking off-kilter jams and voice-cracking vocals that Wolf Parade uphold as their driving forces. The tunes are bolstered by the dynamic mixing duo of Michael Keire and Glen Marshall, responsible for tweaking tracks for the likes of Feist and Apostle of Hustle, and they really accentuate Wildlife's levels of ferociousness, recklessness, and intensity, but overall highlighting their innate sense of fun - and its the best fun Ive had listening to an album of its ilk all year.
So that's the musical down low, but who are Wildlife? I spoke to the band and gleaned some facts of a more personal nature:
- they've been together since late 2006;
- they came together from a wide variety of backgrounds: from punk rock bands to campfire guitar, improv theatre to gospel music;
- at any given moment, someone in the band either has the flu or is on hard drugs. Only one of them is a full time smoker, but he's not allowed to quit because its the only thing allowing Wildlife to call themselves a rock n' roll band;
- they get compared to a few of those modern Canadian indie rock groups (such as Wolf Parade???), but don't really understand exactly why, even though we are big fans;
- if people see them play in Guelph, Ontario, they promise to be really, really drunk onstage;
- they challenge every band in the world to a sweating competition. Every fucking one;
- All of Wildlife's members share the same date of birth: December 25th, 1982;
- I once dared my friend Jack to eat a jar of mayonnaise. He refused;
- Wildlife release their first full length album on November 16th, 2010. The release party was on Friday, the 12th, at a place called the El Mocambo in Toronto. There were free mayonnaise and ecstasy sandwiches and lots of glitter, balloons, White Russians (the people and the drink), Sam Cooke, Ace of Bass and A Tribe Called Quest - plus premiered the new Coen Brothers movie at midnight!

So overall, Wildlife are striking as hard as they can, and can expect diamond results.