Hope This Friday Cover Up Finds You Well... 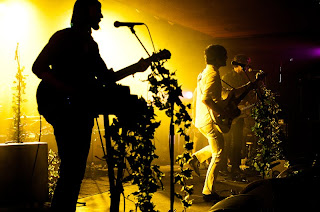 I'm posting this track without due conversation with Paul, so you may get two cover versions for the price of one today - if so, lucky you!

Regardless of this possible breakdown in communication, I wanted to post about Hopewell anyway. The New York band have just released a live album, recorded at this year's Truck Festival as well as ATP New York (having been handpicked by The Flaming Lips). It showcases their penchant for spaced psychedelia, a mainstay of the band since founder Jason Russo toured as a part of Mercury Rev when only 19. They have released a number of albums, the last being Good Good Desperation last year, and have had a steady rise in following since supporting the likes of psych pop slackers The Brian Jonestown Massacre, kings of shoegaze My Bloody Valentine and Swervedriver frontman Adam Franklin. They are about to embark on a Stateside tour with The Dandy Warhols, who may not be at the top of their game but at one stage had the pysch pop slacker corner pretty much covered. This live album (titled, funnily enough, Hopewell Live) is a well realised affair, so much so that some of the tracks are studio quality. It came out on Tuesday via South Cherry Entropy, but is digital only at the moment though - check it out on their Bandcamp site here.

But why a Friday Cover Up? Because they close off proceedings with a pitch perfect rendition of Jane's Addiction's 'Of Course'. And if Perry Farrell had a bit more down home nostalgia to his freaked out wigouts, Hopewell might have been his starring vehicle. Enjoy Sonic Masala-ers - see you on the other side.