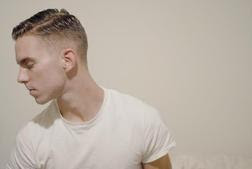 4th interview, woo! So after the admittedly more coherent than expected craziness that is the brilliant Mark Sultan, we delve into the makings of New Love, the hotly anticipated second album of Former Ghosts AKA Freddy Ruppert. He took time out on his heavy touring schedule alongside Xiu Xiu and Zola Jesus to take us through his motivations, the interesting process behind creating a Former Ghosts album, his love connection with local label Upset the Rhythm, and to give a heads up on bands he thinks we should be getting our kicks from.

Sonic Masala - Congratulations on the recent release of your new LP New Love. Its been a warm favorite here at Sonic Masala for the past month since we received it. Before I make some calls on what I think, how was the process of writing it for you as opposed to the genesis of first LP Fleurs?

Freddy Ruppert - Thank you. The general writing process was essentially the same. I would write the song then send it to the people I would collaborate with and then they would send me back their parts and then I would piece it all together into a cohesive unit. One difference is that I did collaborate with Yasmine Kittles in the same room, which was new to me, as all other collaborations have been done through the mail and through e-mail due to the geographic location of everyone else and because of busy schedules. Also, the first record kind of came together really haphazardly as most of the songs were written and recorded as fast as possible to be posted on my personal blog. Whereas this record didn't have such an intense time constraint, it was more of just a frenzied response to myself with a feeling that there wasn't really an audience for it.

SM - A lot of hype surrounded this release. Did you feel any of that clichéd ‘second album syndrome’ pressure, or even a certain level of expectation to provide a certain style of release?

FR - I think the only pressure I felt was that I would just end up remaking the first album all over again. Maybe I did that. Maybe I didn't. I'm still singing about the same exact things. Still obsessed with love and romance. Still approaching pop music from the same lense. My biggest fear was just releasing a second album that was exactly the same as the first.

SM - Personally I think that New Love is unnerving in its honesty and yet its coldness, almost stand-offish in nature, actually finds affinity with the heartbroken in all of us (ahh…). It’s such an alluring listen, with such a see-saw of juxtaposing sounds and emotions. Was there a deliberate stance on creating such a sound that swung back and forth from warmth to distance and back again?

FR - I don't think the bipolar nature of the record was really deliberate but more just came out of naturally being in that state while recording/writing these songs. As anyone can attest to when they are involved in stormy apocalyptic relationships you swing back and forth between "fuck you and fuck this" to "wait, no i'm in love with you, hold onto this". I think this bipolar feel in this record comes from it being more about myself and my own ideas of what love is supposed to be whereas the first record was more directed at someone. I think the whole reason I am even creating music is to just relate to other people on some kind of human nature level- otherwise I'm completely lost as to why I would do this. Sometimes I get e-mails from people stating "thank you for putting out this record, i'm going through such and such, and it let me know that I am not crazy and alone in feeling these things" and for me my response is always like no, thank you for letting me know that I am not crazy and alone in feeling these things!

SM - Let’s talk about the conception process. You’ve stated in the past when bringing together Fleurs that you had always wanted to work with Jamie on a different project, and vice versa, but it took so long to find a common ground. How was it bringing the group (also including Nika here) together again for New Love?

FR - I've always been a crazy dictator when it comes to the creative process of Former Ghosts. I think maybe even more so on this record. Jamie had just put out Dear God I Hate Myself and was gearing up for a year of relentless touring. Nika was putting out numerous EPs and touring like crazy as well. Both of them were extremely busy with their own respective projects. So I think both of their contributions on this record are less than they were on the first. I brought in Yasmine Kittles because I was obsessed with her voice and the way her voice was so different from Nika's. So most people’s contributions on this record were kind of frenzied responses before they were leaving for some insane long tour on the verge of releasing their own huge albums.

SM - How collaborative is the Former Ghosts process?

SM - Since Fleurs’ release Nika’s Zola Jesus has stormed her way into the stratosphere in terms of her popularity and her growing confidence in her medium. Did any of this influence Former Ghosts, the second time around?

FR - No. Just that she was even more busy and both "Chin Up" and "Only In Time" basically came together over instant messenger!

SM - This may be an oft asked question, but how did Nika become a Former Ghost?

FR - I had the first couple of Zola Jesus 7"s and I really liked her voice and what she was doing so I sent her an e-mail asking her to sing the ending part of ‘This Is My Last Goodbye’ on Fleurs. She said she would love to so I sent her my demo version, got her version back and I was so blown away by it. I asked her if she would want to collaborate on more things and that is where ‘The Bull and the Ram’ and ‘In Earth's Palm’ came from. We both agreed that we should continue to collaborate with each other because we both feel like we get something rewarding for ourselves out of it. I really respect what she is doing and she is also a really close friend of mine.

SM - New Love also sees the addition of TEARIST ‘s Yasmine Kittles, as you’ve previously mentioned – what does she specifically bring to your vision for these songs, both in the studio and on the stage?
FR - I had been seeing Yasmine's band Tearist play around Los Angeles for quite awhile and we’ve become close friends and I really loved her voice. I love the female voice in general and I felt like the contrast between her vocal style and Nika's vocal style would be really interesting on the record and what the record was trying to express. There is just such an understated soft beauty in Yasmine's voice, and with Nika there is an overwhelming powerful beauty. I think for me it was more the contrast between everyone's voices on the record. On stage, depending on what the line up is for Former Ghosts that night, the energy completely changes.

SM - You’ve chosen Upset The Rhythm to release the album, as you did with Fleurs. We here are massive fans of UTR – what draws you to put out stuff with them?
FR - Upset the Rhythm are a completely amazing record label. Chris is just such an amazing person. I got to stay at his place for a week and just being around him is super inspiring. His love and energy for new music and all kinds of new music is really inspiring. Chris is also crazy enough to let my crazy self do whatever I want with Former Ghosts and working with him has been so easy. No contracts. No business bullshit. Just a really old fashioned punk approach to running a record label. I love what he does.

SM - How do you feel about the constant Joy Division/Ian Curtis comparisons (and sometimes jibes) that are aimed in your direction? What then would you say is a more accurate reflection of your influences?

FR - As far as the Joy Division/Ian Curtis comparisons - yea I get it, I have a deep voice that is inspired by 80's British music. I don't think that Former Ghosts sounds like Joy Division. I mean, in highschool I grew up listening to a wide variety of stuff- glitchy 90's Warp records IDM, 80's British goth/post punk, synth pop, industrial/EBM, industrial/avant garde- I think Former Ghosts is more of an amalgamation of things I listened to in highschool which was a lot more than just Joy Division. But people always need some kind of frame of reference and they will usually always go for the easiest most obvious thing that other people can relate to as well as well as whatever current genre hype words are being thrown around/revived/invented.

SM - A couple of simple questions to round us out then, if that’s cool. We posted a while back on your Welcome To Old Love mixtape, especially the remix done by Friendzone. So you do work with or embrace the work of others. What acts that are currently doing the rounds do you find most interesting or exciting, maybe even stimulating you creatively?

FR - I think all of these "newer"/more recent acts are really exciting and great and influence me as well as are doing something important and also having a distinct vision of what they want to do and accomplish. I'm usually attracted to artists that have a really distinct vision in how they present themselves:

No Paws No Lions

SM - Finally, what is sonic masala?
FR - Something really, really tasty. Sorry, I can only think of food when I see masala.