Invocation Kits me out 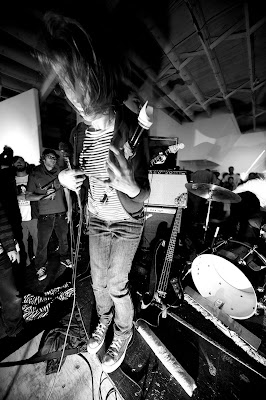 KIT's track 'Merticane' was described by the excellent blog 20 Jazz Funk Greats as 'skate video where every broken ankle sprays phosphorescent goo...' and you know its bang on. Whereas most garage shaped, girl fronted bands this year seem to be taking things seriously, the L.A./Oakland four piece give the impression of approaching every track with a grin on their faces. Practicability isn't something KIT do, there's surprises around every corner, changes in rhythm, switches in tempo, descents into skull rattling noise and hardcore mayhem, from straight pop to chaotic punk, KIT embrace it all with sweet abandon.

They just dropped their second L.P, Invocation, on Upset The Rhythm, the follow up to 2007's Broken Voyage and 2008's Dreams Are Burend E.P. KIT have lost none of their raw energy. Invocation is a more focused affair compared to KIT's previous recorded outings. It may be a more considered trip but it still gets you to KIT's twisted world of fun, just this time around Invocation gets you there quicker, more direct but with a slight feeling of nausea and dizziness from an altogether more intense dark rush. Ever found Pre great but a touch too manic or just wished Death Sentence: Panda! would lighten up for just a second? Then Invocation will be right up your ally. Taste below and purchase here.

Email ThisBlogThis!Share to TwitterShare to FacebookShare to Pinterest
Labels: Kit, Upset the Rhythem