Spending Christmas Running Into The Night 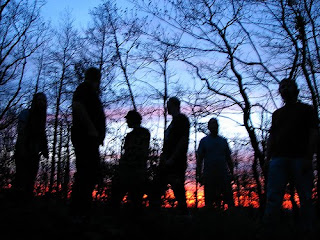 US Christmas (or USX if you're into acronyms) are a band that hark from the Appalachian mountains of western Carolina and Tennessee. They deal a neat line of droning psychedelia that pulls no punches, delving as far into the murk as they can with the constant threat that they will pull you under, never to return. New album Run Thick In The Night is their best example yet of how sometimes beauty can only be gleaned by wallowing in the filth and the dirt, the dank and the dark. Thirteen minute opener 'In The Night' is the perfect prelude of what is to come - over an hour of relentlessness. I think the best way to imagine this is to replace this album as the soundtrack for the film The Descent, but with the film in slow motion. Its not evil, its not even inherently heavy, but it is ephemeral in its adherence to spiralling jams that are punctuated heavily by Nate Hall's evocative howls and croons. He is a great vocalist, unlawfully overlooked in this day and age for bands that use their frontman as a front man, rather than as a underlying cog that drives forward the steaming hulk of a whole. Im reminded (for better or for worse) of Monster Magnet's rather rad Dopes To Infinity due to the mammoth drawling riffs that roll across this LP, but they are able to elevate their sound to a more varied (and amazingly produced and executed) sonic plane. I only came to US Christmas a couple months ago, by hearing 'Black Lung' off last year's Eat The Low Dogs thanks to great blog Swan Fungus. Now I can add another destroyer to the upper echelons of my psych dirge temple.
US Christmas are supporting Neurosis on a few US dates in early 2011. Run Thick In The Night is out now through Neurot Records.
US Christmas - In The Night
US Christmas - Wolf On Anareta
US Christmas - Black Lung
Posted by Brendan T