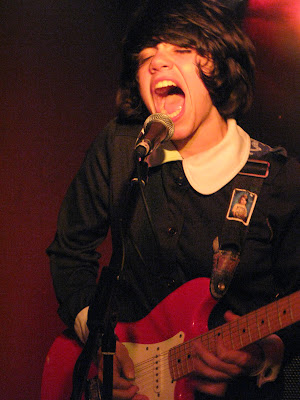 It is a small intimate affair for this evening's Upset The Rhythm show at The Luminaire. One of (if not the) best venues in London, Kilburn's Luminaire offers the avid reverence to music that true music lovers desire - and the venue's lack of adherence to any one musical style or genre heightens the altruistic nature that its velvet and warm glow exudes. 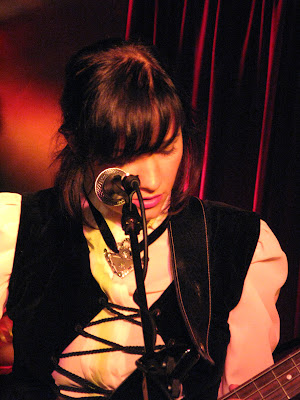 Tonight we are here to witness the energetic garage pop fury that is New Jersey's Screaming Females, but before they enter the frame we view Trogons. Steeped in 60s/70s psych pop, Trogons offer up a Doors-esque sound that is driven by the high in the mix keyboards, which is not a disservice as it is these flourishes that help this fledgling act rise above any more cliched tropes. The lead vocalist showed a nice range, although many of the songs required a low, deep register, and it is here that the songs got lost, as the vocals helped to enforce the drive of each track. They certainly had their moments, when the band would collectively wig out on a less common trajectory, but on the main Trogons didn't stray too far from their idols' (aforementioned Doors, with a sprinkling of Spacemen 3) paved-in-success frameworks, with their one venture into the abstract, their second last offering, coming off more carnivalesque than trailblazing. Not Cool - Um, You Didn't Do That In The Soundcheck

Not Cool came on next, and without much ado they launched into one of the best (and definitely expected) support sets I've seen this year. Of course this came out of left field, which always heightens the experience, but it was with the wanton abandon these boys set about thrashing the shit out of their tightly-coiled garage punk with such precision that blew me away. A new song (for them at least; to me they were ALL new) is dedicated to their landlord, and this explains some of the band's innate tightness - three twentysomethings in a band, in the same house, playing every day... And whilst lead Matthew, with his skinny jeans, coiffed hair and his Garfield jumper, is decidedly not not cool, the 'engine room' are about nothing else but the music. The way in which bassist William flailed about nonstop for forty minutes - at one moment facing the amps limbs akimbo, at another bent double like a vertical foetus - reignited in all the sense of wonder in discovering the joys of a simple chord and playing it to within an inch of its life. Drummer Andrew was anything but mechanical, belting the skins like his life depended on it - and it probably did. Japandroids may have some stake in what is being dished out on stage, but by the end of the set, it is evidently clear that Not Cool are decidedly cool as fuck, and they don't even know it. Hopefully it stays that way, because they have the potential to wreak global carnage. 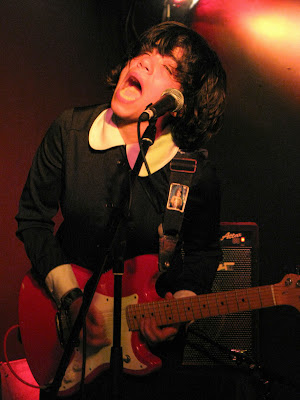 Screaming Females - I Don't Mind It

This is one of the quickest UTR gigs yet, for not long after Not Cool have exited in a blaze of spontaneous combustion that Screaming Females are ripping into their first number. Marissa Paternoster ambles meekly onstage and straps her guitar on. She is diminutive and cute, like a cross between the sadly defunct Ponytail's Molly Siegel and Edna Mode, the fashion designer from superior Pixar film The Incredibles. And to be honest, as soon as the first song is under way I cant get this out of my head. Paternoster is a guitar demon, a vocal visionary, and a screaming (female?) banshee, a true presence that threatens to burst forth and envelop the entire venue in effervescent joy. She is a maestro, and the way she contorts her body and voice whilst her hands eviscerate the fretboard is truly jawdropping. The band hits the turbo button, blasting from classic rock to 90s indie slacker rock to amazingly loud punk noise with nary a space for a necessary breath. The set was smattered with tracks from last album Castle Talk and newie Power Move in what was a seamless setlist, ending with a squalling noisefuck of a track that had Paternoster channelling her inner Reagan from The Exorcist whilst the 'engine room', Jarrett Dougherty and King Mike, propelled proceedings to the nth level. Screaming Females leave the stage having made their statement - that indie rock can be warped and incredibly loud, intricately noodled, and amazingly rendered - with a sledgehammer. I think I'll have tinnitus for a few days after this, and for that I am grateful.

Email ThisBlogThis!Share to TwitterShare to FacebookShare to Pinterest
Labels: Not Cool, Screaming Females, The Luminaire, Trogons