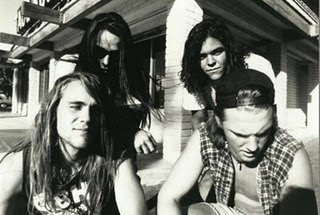 Here we are another reunion what the fuck moment. With every band under the sun travelling down the reformation to pay the bills and drug habit route, it was a matter of time before gods of desert stoner rock Kyuss decided to reform. Im not sure what to think - ok, Ill drop the pretense - IM MORE THAN A LITTLE FUCKING EXCITED!! Founding members John Garcia, Nick Olivieri and Brant Bjork are back, and are bring their mammoth back catalogue to the UK in March/April next year! Under the moniker Kyuss Lives, they will be visiting then suitably destroying Nottingham, London, Wolverhampton, Manchester and Bristol.
Hmmm - no Josh Homme? He is a guitar wizard and really drove the later tracks of Kyuss forward - but why am I a smidge glad he hasnt attached his name as of yet? Maybe I have reached my limit with him for the moment - hello Jack White? Yes, they do some amazing stuff, but its been a bit on the decline in my opinion, and they are on the verge of disappearing up their own backsides if they dont just shut up and play. OK, rant over - excitement overdrive ramps up again!
Kyuss - Conan Troutman
Posted by Brendan T