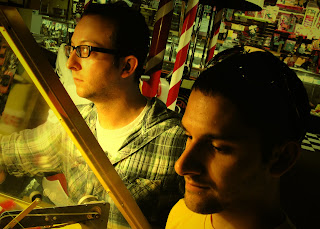 Indiana duo House of Bread have just released their self-released 3rd LP, Superhuman Tomb, and its a great little number. In this day and age of bedroom pop navel gazing brought to us from the arse end of some rusty cans and a piece of mouldy string - whether it be due to DIY necessity or just because its so in right now - it is not only refreshing to hear something that takes care in the intricacies of sound production, but are stretching out far and wide to discover how big their sound can be, whilst perfecting the art of the silence. It shouldnt be a surprise that House Of Bread can construct well realised songs - members Omar Azfaal and Bob Haddad have been in bands All Nite Skate and Castles together, and have been toying with this band's sound since 2006 - and yet there is a real sense of freshness to this offering.


Opening with soaring instrumental Nebula A908 - a mixture of Sigur Ros' eccentric musical interplay and shimmering guitar - Superhuman Tomb leads into Flying Nomads, Azfaal's vocals only on a slight reverb (read: the effect enhances his vocals, not a device to disguise the fact that the guy cannot sing) as he plays back up to some chugging guitar lines that canter into the sunset... 'Artificial Man' offers up some Krautpop tinkerings with elegaic vocals before stretching out in a Yo La Tengo pop mangling. Further along the track we get 80s Bruce Springsteen with synths-meets-Electric Soft Parade Hazy Boy, the quirky and ultra catchy Bunfs and the slow drum MOR of Snow Globe Smasher II, before closing the mish-mash behemoth that is 'Bloody Scouts', where every influence they can think of (Super Furry Animals, Flaming Lips, Machine Translations, The Cure, Devendra Banhart, Kraftwerk, Yo La Tengo...) is thrown at the canvas. Its this culminating track that probably encapsulates Superhuman Tomb the best - moments of fun and cerebral noodling amidst washes of aped classics of yore.
And to be honest, why not? The production shimmers with a glossiness that is somewhat lacking in most 2010 releases, and the guys really have put some heart into their babies here. A rough yet substantial gem.
Superhuman Tomb is out now.