I should mellow over Damaged Erase Errata 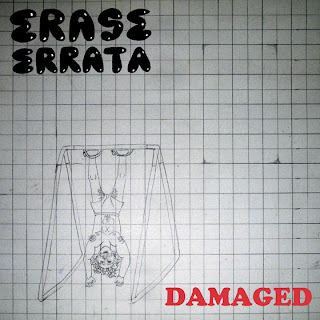 You won't believe this... but this is God's honest truth. For the past week I've been preparing a post about San Francisco's Erase Errata, one of those posts about a recent band that have drifted off the radar of late, where are they now? Wish they'd drop some new material, etc, etc. Then in a total coincidence they go drop a new track! The first since 2006 L.P Nightlife. I'm not making it up, its not some convoluted intro for news about a 7" release, honest.

So you can imagine my excitement upon discovering the Erase Errata's new 7" Damaged, out on Kill Rock Stars that dropped this time last week. It does have one slight drawback in that my original post is now totally defunct, but its a small price to pay to have Erase Errata back in the fold. But to be honest its not like the San Francisco trio don't have previous form when it comes to making us wait. Their last two long players, At Crystal Palace (2003) and Nightlife (2006) dropped three years apart, so surely after four years a new album in overdue? Anyway I was going to wax lyrical about how good the abrasive angular funk-punk shapes that made up Erase Errata's sound were, how the bucking bass of 'The White Horse is Bucking' was so perfect, how 'California Viewing''s thudding rhythm could batter even the coldest of hearts. Then there's Nightlife, Tax Dollar shouldn't need any introduction, if it does you're really missing out, there's the rumbling descent into chaotic noise and timing change that is 'Another Genius Idea from Our Government', the fog inducing heat haze of 'Rider', I could clearly go on forever but it seems all a bit academic now, you want to know about the new material.

Erase Errata - Another Genius Idea from Our Government

Well it seems the sands of time have smoothed Erase Errata's hard angles, they've softened their edges, rounded their sound like a granite stone lost at the bottom of a stream covered in a cold fog. But there's a catch - underneath their new mellowed pebble form Erase Errata are still as hard as they ever were, you can still feel that bass rumbling away, more so on b-side 'Ouija Boarding'. Its all points to a new subtlety, an intriguing prospect for any new Erase Errata L.P.