Sinking The Talons In 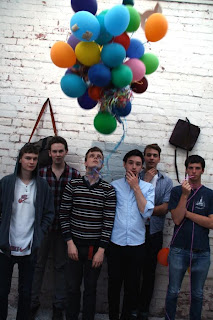 Talons arent that new - they've been around since 2008, and they are an reincarnation of a former outfit - but their sound is incredibly fresh. Not in that poppier than thou, high production values, "we'll change the world" kinda fresh either - this is some dense, intricate, manic shit. This is energised instrumental math rock (with violins!) - and it comes from a large young collective based in Hereford! Whats more, after floating around the scene for a bit, they are dropping their debut LP Hollow Realm (via Big Scary Monsters) this month. This is a huge release. Dont believe me? Try on first cut from the album, 'Peter Pan', below. There are echoes of Mars Volta in the opening volleys, plus the intense and insane caterwauls of Irish mad bastards And So I Watch You From Afar as the song intensifies. Whats more, this is amazingly polished - in part due to their producer, Forward Russia!'s Tom Woodhead. This has already raced up the list as not only one of the best new band releases of the year, but one of the best UK releases of the year. Make sure you get a hold of it as soon as its been forced into its circular waxy form, stat!
And if you want to catch them live, they are launching Hollow Realm at the Amersham Arms this Saturday, before they continue on for a November England tour.
Talons - Peter Pan
Posted by Brendan T

Email ThisBlogThis!Share to TwitterShare to FacebookShare to Pinterest
Labels: And So I Watch You From Afar, Big Scary Monsters, Forward Russia, Mars Volta, Talons