Kicking Out The Moonpearl Jams 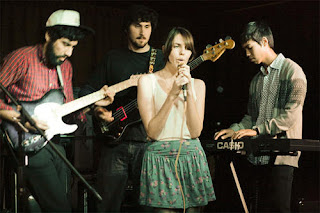 Got an email from Sam Farzin, who juggles both label Life's Blood and the machinations of his own act, Moon Pearl, whose new EP Pearl Jams is out now (the band is giving it away on their Myspace too).

First of all, Life's Blood Records has been moving along since last year, and already Farzin has had some nice releases, not least Bridgetown Records radmeister Kevin Greenspon's Rose Window and a four-way split release that featured none other than Zach Hill ("Green Bricks"). Farzin maintains that no genre is off limits, and with a couple of his acts - Pregnant, Wonder Wheel and Kites Sail High in particular - finding themselves on some interesting Stateside bills alongside the likes of Foot Village, Nobunny, Dustin Wong (ex-Ponytail), and Soft Circle (ex-Black Dice).

But I am also massively enamoured with the punk fuzz mayhem that is his main musical outlet, Moon Pearl. Whilst not having the technical arty angle that Ponytail extolled, the two still share an affinity for exuberant avant garde sonic fusion. Their EP Pearl Jams perfectly encapsulates the fragile nature of splitting an atom that was found in a rogue rainbow - if it all implodes, will we still be having fun? That anarchic grin thats slapped across your face would seem to indicate an unequivocal 'YES'.
Here's a clip of them playing FMLY Ride this year - and yes, that is a burning drum...


Moon Pearl on FMLY RIDE from FMLY on Vimeo.

Email ThisBlogThis!Share to TwitterShare to FacebookShare to Pinterest
Labels: Moonpearl