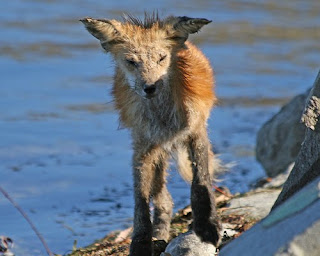 Let me explain that heading. I was typing about another band, Entire Cities (who I promise to get to by the end of this night!), when a new email dropped into the inbox. It was from one Justin Talbott, one half of Brooklyn's Noxious Foxes. The two piece are true to their name, doling out some truly toxic instrumental noodlings that evoke math rock at its most brutal and intense, whilst also allowing (via loop pedals and a nice dollop of scuzz) some nuance and class to enter the frame, therefore making them better than most math rock wannabes - these are stellar compositions here, not just some guys who can play their instruments well but dont knoa hook or melody if it bent them over and called them their little piggy. I was duly impressed, so dropped what I was doing and wrote this. So enjoy 'Heavenly Spectacular', a track off their forthcoming LP Legs. Ive listened to it 6 times since its come in, and Im sure itll be played a few more tonight. Also, if this floats your boat, you can grab previous effort Lovestorm here.

Oh, and by the way, Noxious Foxes voted for Caribou's Swim for album of the year - you still have two days left to vote on Round 1!

And if that's not enough, get a load of them live!

noxious foxes - wherever hugo, guido from justin on Vimeo.