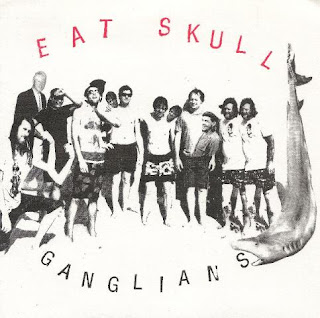 Tonight is yet ANOTHER Upset The Rhythm show - this time its Ganglians being supported by Eat Skull and Graffiti Island.

I make it down to XOYO - second time in a week! - in time to catch opening act Graffiti Island. They perform a lackadaisical set, mainly set by the frontman's over nonchalant approach to being out front, with weird mumbled interludes and such. And whilst the band's brand of tropical lo fi punk is a little samey, there are slices of radness throughout, evoking Buddy Holly via the Wipers, mainly driven by the bassist's businessmanlike approach to each song, which juxtaposes his tie dye shirt, tattoo sleeves andf Urge Overkill haircut. Ill be keeping an eye on these guys in the future months.

Next up - Eat Skull, the band Im really here to see, and they dont disappoint. In their 40 minute set, they display the shambolic nature of their sound, their songs, and their interplay - and it always works. They are Americana stripped of earnestness; they are doo wop stripped of innocence; they are college rock stripped of cardigans (and prone to beating the fuck out of Rivers Cuomo). Live the fuzz that permeates their fizzing releases is mostly eradicated, and the songs rise to the occasion, as does lead Rob Enbom, whose voice alters to fit the mood of the songs, whether it be the slimier early insane ones, or the later, more melody-laden spike bombs. All in all, a great if too short set - and to think they are struggling for shows over here!

Finally its Ganglians turn. I havent been the biggest fans of Ganglians, but the first half of their set seems about to change my mind. More intricate and daring than their normal trop punk shtick, this is highlighted by their 'new' track, a more meandering psych affair that shows a possible new dawn for the band. The second half though goes back into their normal oeuvre, and is all the more unconvincing for it. Dont get me wrong - they are a relatively in tune band, with some interesting things to show us - but with the vocals under constant reverb as always, the indie pop dreams that infuse this fuzzy mess just comes across as uninspiring. Second time Ive seen Ganglians - second time Ive left feeling like Ive been duped. Ah well - at least the supports were able to prop up the show, and as always, UtR give a polished show. Time for another beer.
Posted by Brendan T