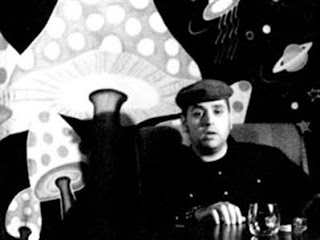 So yeah, Sonic Masala's third interview! And I must say I am very happy with the results - the subject is Mark Sultan, AKA 'BBQ', a godfather of the modern garage rock movement. My technique is still a far way off from Jeremy Paxman, but Im getting cheekier - so let's have at it then, shall we?

SONIC MASALA - Welcome to Sonic Masala Mark!
MARK SULTAN - A pleasure. Will this affect the current rapport I have with my toilet?


SM - Depends on how well your immune system holds up to aural spices I guess! So, performing under your own birthname huh? That’s a bit blasé of you – have you run out of monikers for yourself already? Surely not! So what is the impetus for putting out music as Mark Sultan?

MS - Well, Smartypants, this is not my real name! This is more a means for me to possibly garner SOME recognition, so I can maybe have ONE decent tour in my lifetime and possibly rely on myself for once! But the impetus is basically so I can perform and record the same decent music, but done with more influence and less limitations. It’s funny when people complain about this new album not being straight-forward enough – I have made 87657546 of the most primitive and straight-up rock’n’roll records you will EVER hear, but these folks probably don’t know it. So ya, I get to do more things.

SM - Why is there so little output as Mark Sultan? You are a very prolific musician after all…
MS - Sure, as Mark Sultan, only two albums and a couple of singles. But that is still a decent amount for anyone. It’s not like when I wrote and sang and performed stuff as ‘BBQ’ or in King Khan & BBQ or in any other band I was in it wasn’t me. I did a shitload in those bands. Tonnes of music. It’s all still me.
SM - The collaborative process has always been the driving force of the gamut of your music. Are there any particular incarnations that you’ve been in that you’re especially proud of?

MS - I’m ‘proud’ of most of what I have been able to do or I wouldn’t put it out. That being said, the stuff I have had less control over release-wise that I have collaborated on with bands like Deadly Snakes or Black Lips or Jack Oblivian… Well, I still have no qualms with that stuff. I can officially say I was proud to have been invited to do that stuff.

SM - Are there any musicians or groups out there that you wish to warp music with?

MS - Like people I would wanna collaborate with? I dunno, but I’d love it if some band with similar sensibilities (a love of both pure rock’n’roll and avant garde shit) would snatch me up to sing in front of them, maybe do improv weirdness, I’d be in.

SM - You like to explore the extremities of the genres that intrigue most, such as psych, doo wop, country, punk – and eschew the tropes within these genres to create an iconic sound. What are the direct touchstones for $?

MS - I just love a LOT of music. I am pretty well versed and have a serious reverence for good shit. These things, these sounds I ended up exploring… They are LOVES of mine. I wasn’t subconsciously trying to meld a bunch of genres together, but I guess it just sounds that way. I have always maintained a certain level of timelessness in my songs or recordings – even when they were almost traditionally rock’n’roll – because I am me and I will do things that satisfy myself, no matter the scorn. I just think all of these sounds, no matter the superficial differences between them, are all cut from the same cloth. I just want to make a nice pair of socks with them.

SM - $ is infused with all your normal energies and musical tropes – it is a Mark Sultan record, through and through. Yet we have a couple of meandering tracks bookending the punchy verve of the rest of the album, plus the drawn out doo-wop beast that is ‘Ten of Hearts’ – is this intentional?

MS - Nothing was intentional. But I do know that I would never shorten – or draw out – anything on purpose. Whatever I felt like writing or recording is what I did. People complain about the length of some songs. I dunno. I don’t get it. I didn’t think music critics were into the 3 minute rule. I thought reviews were about content and not entertainment. Ultimately, I don’t give a fuck what people think – if they won’t listen to all of ‘$’, because they can’t get through the opener “Icicles”, then they have fallen into my trap. I don’t want someone with no patience listening to anything I do. Go listen to ‘all hits radio’. And forget what you were into next week. Hip! I like to look at longer songs in general as more like one connected moment I can spend with a lady, or spend destroying a house. Sensuality and anarchy versus piston-fucking and focused violence.

SM - Can I get a fuck yeah! We love our long songs here, no question! So whats the future of Mark Sultan? Back to the BBQ anytime soon?

MS - No idea. I live for today. But I just did a US tour kind of as my one-man band (BBQ), though it was billed as ‘Mark Sultan’, for the most part. It was awesome. I am taking a couple months off to enjoy my new apartment and finish up two new albums and then I hope to tour a bunch, as usual.

SM - God, I feel these questions are so staid, so fuck it. Nonsensical questions from here on out. If you indeed are the end as you state in the track, er, ‘I Am The End’, whats the beginning? And will ever the twain meet?
MS - I believe that time doesn’t exist and if it does it makes no sense as we know it. If I believed in time, I would be inclined to think it is speeding up. Maybe I do believe it. In any case, the ‘End’ is non-existence, I guess. So it’s a farce. There is no beginning.

MS - I had some awesome kicks a few years back. I would dance so hard, my pants would fall down. Berlin, baby!

MS - We were both of the both, just mirrored in a vacuum.

SM - When can we expect you to come to the UK and set fire to this feudal empire?
MS - When someone invites me in such a way that I don’t get paid in water and treated like a piece of fucking shit.
SM - Finally, what is sonic masala?
Something so delicious-sounding that I am in a state of synesthetic shock. I seriously haven’t eaten music in days. I was hoping at first that it did not hurt my bowel, but have since realized it has rendered me a victim of the verbal trots.

Mark Sultan's $ is out now on Last Gang Records.
Posted by Brendan T