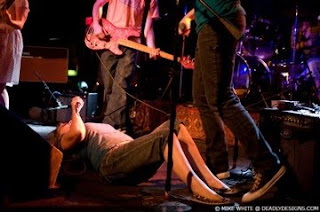 Tunabunny are another Athens Georgia band that are totally fucking with conceptions. Growing up in Athens, surrounded by a surplus of instruments and boredom, these three girls are throwing old (and almost cliched at the minute) influences such as the Raincoats and newer stylings like the ever popular Sleigh Bells, Ponytail and other hyperkinetic whirling dervishes into a Large Hadron Collider of their own instrumental making to explode people's minds. Or, in their own words, "Sun Ra and Abba meet to begin Intergalactic peace project. This happens at the precise moment when the Go-Go's meet the Fire Engines in the early 1980's." Nuff said...

Or is it? I heard Tunabunny's 'Flowers On The Stage' last night, and it was NOT what I was expecting. The opening droning riff echoed Sonic Youth before a whole lot of off kilter distorted moans and screeches melted my speakers. This noise segued into the (not so) slightly deranged catcalls about the goddamned flowers on the stage. This psycho head trip seems a lot longer than its three and a half minutes - and that is actually a very good thing. But if you want elongated Tunabunny, hunt down their debut recording from last year, Outer Space is the Center of the Earth - a 19-minute one-take journey recorded live in an afterhours coffee shop...

The girls are releasing their debut LP Tunabunny on Happy Happy Birthday To Me Records - expect to see it scooping the Latin Grammys, inspiring the next Tracey Emin installation, inciting riots in Bangkok and putting the "is it a planet or isnt it?" debate about Pluto to rest by blowing the fucking thing up. And they will keep doing their thing regardless.

Tunabunny - Flowers On The Stage