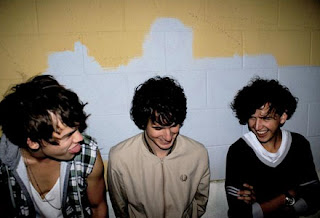 Sticking to this inadvertent, totally accidental New Zealand music theme, we turn our lights to Popstrangers, a three piece who are making major waves over in Auckland. Since the release of their debut self-titled EP last year, they have supported the likes of Peaches, Crocodiles and Die! Die! Die!, also having garnered a slot on the Big Day Out lineup.
Not bad, you say? Well, yes, we'd agree. But a lot of tosh gets good grades, don't they? Yes.
SO we decided to cast this "talking to myself and answering my own questions" chutzpah aside, bypass their early stuff (which has a swirling indie rock tempo that nonetheless delves into the darker shades of the rock realm) and have a crack at a couple of cuts from their upcoming EP Happy Accidents. It is my pleasure to state that the trio have gotten louder over the past 12 months, whilst retaining a pitch-perfect sense of mid-90s slacker indie angst. The vocals remind me so much of one of Australia's greatest underrated acts of the 1990s, Gaslight Radio - and that alone gets them the thumbs up! And then the second half of 'Avenue' comes across as an early ...And You Will Know Us By The Trail Of Dead track, and our thumbs exploded!
Over all, what Popstrangers are able to convey is a tight level of songwriting that many bands toss aside for some scrambled airwaves - and whilst noise is always welcomed, its embraced when done with a clear objective and a high degree of coherence. Whilst there isnt a release date for anywhere other than in their home country, Im sure it wont be long before Popstrangers come knocking at our doors...
Popstrangers - Avenue
Popstrangers - Their, There
Posted by Brendan T

Email ThisBlogThis!Share to TwitterShare to FacebookShare to Pinterest
Labels: And You Will Know Us From The Trail Of Dead, Crocodiles, Die Die Die, Gaslight Radio, Peaches, Popstrangers