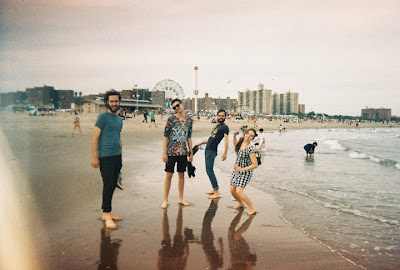 For this weeks Friday Cover Up we've got a bit of a two in one type post going on. Brain Idea's cover of Kiwi classics The Clean's 'Getting Older', something I can identity with this week, but first a bit of info about Brain Idea.

The Chicago trio have just dropped their first LP, The Survival Scroll, with Permanent Records, a demo tape being their only previous outing. Its a whoozy, fuzzed out record that wanders into nice interludes of playfully, distorted instrumental noise. Brain Idea have the nice knack of making their tracks blend together, the sort of LP that washes over you the first time around only to reward you on repeated listens. DIY-style rock'n'roll chock full of catchy riffs, Brain Idea's The Survival Scroll is the sort of soothing grind that's perfect for a quiet Friday down the pub. Everyone seems to be pointing out the UK DIY and the influences of New Zealand's The Clean - maybe that's 'cos of their The Clean cover? Whatever, it makes a perfect Friday Cover Up. Taste and buy here.