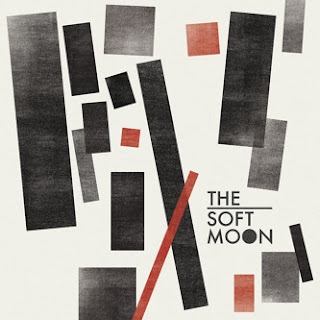 Earlier this year San Fransisco band Soft Moon (or is The Soft Moon? I'm not sure) dropped a couple of unassuming 7"s, Breathe The Fire and Parallels. I say dropped but really these tracks seem to slide their way into my subconsciousness, popping up now and again when the iPod is set to 'random'. Each and every time I would dig the now battered player out of my pocket to answer the inevitable mental question 'Who's this?', make the mental note to check out more Soft Moon, even post about it, and then I promptly forgot about it.

Maybe it was the obvious and lazy Joy Division comparisons of Breathe The Fire or the fact that Parallels slides by in just over three minutes but feels like it could easily last twice as long that made move on so quickly, but whatever the reason I wont make the same mistake again 'cos the self titled Soft Moon debut LP landed today, out on New York label Captured Tracks.

Stretching out Soft Moon's intense darkwave themes over a whole LP makes so much more sense. This is pop but the coldest, darkest, most fucked up pop you'll land this year. Its low-slung basslines throb, its synth buzzes and distorts, soft noise seems to consume everything, it's like being consumed by black treacle. The Joy Division and Bauhaus references will always be there but dig a little deeper and you'll discover a slick and darker beast beneath.