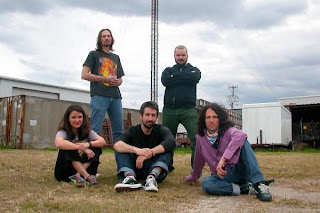 Just a quick post about the band Floor. This brilliant stoner drone band from Miami were only around for a wee time (1992-96 in any sort of continual existence; on and off over the next few years), having released only two albums (both in a sort of posthumous setting, and the self titled LP of 2002 being particularly mindblowing) and a wash of singles, splits and 7". Yet it wasnt until they called it a day and went on their separate musical journeys (most noted being Steve Brooks' formation of Torche) that Floor's strength and prescience in their little corner of the musical world began to be noticed for what it was - a behemoth of ragged chugging riffs, epic drumming and hollered echos that emanated above and beyond their station. 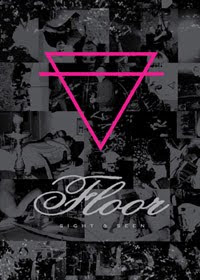 This has all culminated in a brief reformation of the band in April 2010, where lucky punters got to see Floor play three sets, each with a different drummer from the past, that spanned their entire psych drone dirge oeuvre. And whilst the vast majority of us weren't even in Atlanta in April, let alone at the gigs, we can experience through Sight & Seen (put out by Chunklet) , a multi-camera performance coupled with professionally recorded and mixed audio, developing into an enveloping, droning wall of guitars. Floor's two guitarists, Anthony Vialon and Steve Brooks, spend over two hours on stage with their various drummers. Their three drummers, Betty, Jeff and Henry, rotate through the band's lineup: crashing through their early singles, smoking the viewer with their mid-period haze and ending with the cathartic and anthemic final album. With a fuckload of extras, what makes this package even more enviable is that it is limited to 700 - and it has been sternly stated that it will never be re-issued. EVER.

Im crying myself to sleep over the fact that Ill probably miss out - but I dont want you to be in this boat. Go here and pick up what is truly an inspired band that were truly overlooked at the time, as they weren't of their time - they were past it, beyond it even. 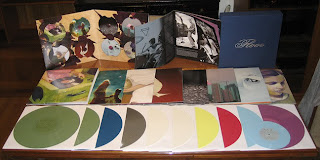 And to rub salt into the wounds, Floor a re releasing a mammoth box set, Below and Beyond -ten 12" LPs, one 7" EP, eight CDs and a (roughly) 32-page booklet of writings, photos, lyrics, artwork (and more) are all to be housed in separate jackets contained within a custom cloth-bound box. Each record comes on a different color of vinyl to match to the corresponding artwork, and two etchings accompany recordings that didn't have appropriate flipsides. 305 copies available...


Fuck...me...
Below and Beyond is available now here.

Don't believe me? Get into Floor, and you'll hear so many bands that have emulated their blueprint for destruction - Part Chimp, anyone?
Floor - Night Full Of Kicks
Floor - Triangle Song
Posted by Brendan T