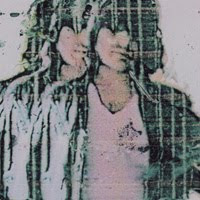 I know that Philly's Purling Hiss has just released an EP that I am yet to listen to, or the Woodsist newie Public Service Announcement, and that PH mastermind Mike Pollize is in another band, Birds of Maya, that is his apparent 'day job' - and yup, havent heard them either. Which makes me a bit of a bastardero. But whilst Im endeavouring to brush up on these three factors, Im going to introduce you to this self-titled debut LP. Purling Hiss is fuzzy, indulgent, ambling, incredibly loud and unrepetent. Think of recent SM postees Bo Ningen and their ilk - that Japanese psych that curls in and out of itself, and is so insanely fucked up that you cant explain why you like it, you just do. Then mate that with the dissonant sleaze scuzz of Puffy Areolas...oh yeah...
It comes from the bosom of the jam, and refuses to leave. Hang on a minute, it does - middle tracks 'White Machine Noise' and 'DUI' are less than a minute bites of mangled noise - but the album is bookended with such ridiculous hyperbolic sojourns into rainbow noise that they are more a 'blink and you'll miss it' break up to the rest of the album's trip.
Purling Hiss is out now through Permanent Records - if you can still get a copy. If not, Hissteria is out on Richie Records (who have also had Kurt Vile in their midst), whilst start saving for the Woodsist debut Public Service Announcement.