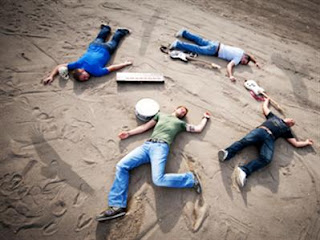 Toronto four-piece Old World Vulture blew me away with their self-released, self-titled EP of earlier this year. What hit me about this instrumental act is their simultaneous adherence and abhorrence to the tropes of instrumental rock, or post rock. There is the sweeping cinematic nature of the building dynamics of sound ('Destroyer'), the relentless balls to the wall ferocity of guitar wails ('Benny') - but not only does the added loops and synth add another dimension, there is a particular styling to each song that ensure that all 6 tracks stand out. 'How The West Was Lost' felt like a dystopyian Western scored by Texans Zombie Western - and Vangelis... whilst the sweeping charm and slight shadow of Holy Fuck esque disco on 'Bastard Engine' and the dreamlike synth lines undercut by rumbling bass of 'Too Much Eye Makeup' heralds a brooding menace to come... Not only is Old World Vulture an assured release, it showcases a band not afraid to play with their boundaries, and to do it in concise cuts. I havent been able to get these tracks out of my head for a week now. I havent been this excited about a new instrumental band this year since Rangda released False Flag, and although it isnt the same brutal bludgeon that they push forth, Old World Vulture are a world unto themselves. A great seal of approval.
Old World Vulture are recording material for their debut LP due out next year.
Old World Vulture - Benny
Old World Vulture - Too Much Eye Makeup
Posted by Brendan T